From the award-winning, New York Times bestselling author of NOS4A2 and Heart-Shaped Box comes a chilling novel about a worldwide pandemic of spontaneous combustion that threatens to reduce civilization to ashes and a band of improbable heroes who battle to save it, led by one powerful and enigmatic man known as the Fireman. The Fireman is coming. Stay cool. No one knows exactly when it began or where it originated. A terrifying new plague is spreading like wildfire across the country, striking cities one by one: Boston, Detroit, Seattle. The doctors call it Draco Incendia Trychophyton. To everyone else it s Dragonscale, a highly contagious, deadly spore that marks its hosts with beautiful black and gold marks across their bodies before causing them to burst into flames. Millions are infected; blazes erupt everywhere. There is no antidote. No one is safe. Harper Grayson, a compassionate, dedicated nurse as pragmatic as Mary Poppins, treated hundreds of infected patients before her hospital burned to the ground. Now she s discovered the telltale gold-flecked marks on her skin. When the outbreak first began, she and her husband, Jakob, had made a pact: they would take matters into their own hands if they became infected. To Jakob s dismay, Harper wants to live at least until the fetus she is carrying comes to term. At the hospital, she witnessed infected mothers give birth to healthy babies and believes hers will be fine too. . . if she can live long enough to deliver the child. Convinced that his do-gooding wife has made him sick, Jakob becomes unhinged, and eventually abandons her as their placid New England community collapses in terror. The chaos gives rise to ruthless Cremation Squads armed, self-appointed posses roaming the streets and woods to exterminate those who they believe carry the spore. But Harper isn t as alone as she fears: a mysterious and compelling stranger she briefly met at the hospital, a man in a dirty yellow fire fighter s jacket, carrying a hooked iron bar, straddles the abyss between insanity and death. Known as The Fireman, he strolls the ruins of New Hampshire, a madman afflicted with Dragonscale who has learned to control the fire within himself, using it as a shield to protect the hunted ... and as a weapon to avenge the wronged. In the desperate season to come, as the world burns out of control, Harper must learn the Fireman's secrets before her life and that of her unborn child goes up in smoke.

Loved It submitted by monkk on June 23, 2016, 7:57pm I loved this book. I found that I got much more attached to the characters than in other Joe Hill books (which are good as well, I just wasn't as emotional about them). The story details are a bit far-fetched, but it is apocalyptic horror fantasy, so that's to be expected. I might have shed a tear putting this in the return drop box, I just didn't want to let it go. Hoping for a sequel!

Great Book submitted by lawrencekl57 on August 5, 2016, 12:10pm This book reminded me of "The Stand." A deadly disease spread all over the world. Heroic (and not) characters abound. It was a long read, but I hated to see it end!

Neat twist on pandemic genre submitted by eknapp on August 18, 2016, 10:40am Fiery plague rocks the world. Joe Hill puts an interesting twist on the pandemic apocalypse genre: those who get sick sooner or later spontaneously combust, and as their numbers grow they start taking cities, forests, whole societies down with them.

And topical to boot. Hill depicts a variety of ways that those in authority use "safety" to justify power accrual and abuse of that power. He doesn't actually SAY the words 'Patriot Act', but he's thinking it.

As usual, the real enemy isn’t the disease. It’s humanity and its base instincts for tribalism. The moment cracks appear in the social lattice, the fearful and the hateful begin systematically eradicating the sick. And genocidal opportunists are just the beginning. The author has a remarkably low opinion of us.


Hot Title submitted by Judeyblu on June 17, 2019, 8:34am As usual Joe Hill exceeds my expectations. Not a mere apocalyptic novel, he adds depth and development to the characters. 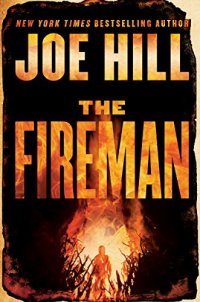