Sunset Towers -- Ghosts or worse -- Tenants in and out -- The corpse found -- Sixteen heirs -- The Westing will -- The Westing Game -- The paired heirs -- Lost and found -- The long party -- The meeting -- The first bomb -- The second bomb -- Pairs repaired -- Fact and gossip -- The third bomb -- Some solutions -- The trackers -- Odd relatives -- Confessions -- The fourth bomb -- Losers, winner -- Strange answers -- Wrong all wrong -- Westing's wake -- Turtle's trial -- A happy fourth -- And then ... -- Five years pass -- The end?
The mysterious death of an eccentric millionaire brings together an unlikely assortment of heirs who must uncover the circumstances of his death before they can claim their inheritance.

Pieces of the Puzzle submitted by Caser on July 6, 2010, 6:51pm As a child, I remember being inspired by the puzzle that drives this story, although I thought it was a tough read as a 4th grader. Returning to the tale as an adult, it turns out it's still an intriguing mystery, but only after you sift through the disjointed, clunky narrative and the pile of sixteen skeletonish, or outright vile characters that play the "game."

In fact, the pages are so loaded with characters that Raskin doesn't have enough space to flesh out each one; instead, she jumps around from person to person nearly every sentence, and the reader is left wondering, "who is this again, and why should I care about them?" My mind wandered constantly while reading, so I don't recommend this as a pick for any reluctant youth readers.

Once you get a handle on the characters, or "players," the clues are challenging enough to really want to piece them together ahead of the conclusion, which is worth the read for sure. It's not as good as I remember it, but strong readers will probably like it.


Good submitted by ljq on July 18, 2011, 9:25am This book can be very, very confusing for children who are not yet 10 years old. I wouldn't recommend it earlier because then, even the brightest of kids misinterpret the ending.
However, this book is really fantastic. There's mystery, suspense and the knowledge of figuring things out along with the characters.

Good, But Confusing submitted by alumeng.ajl on June 16, 2012, 6:52pm This book was unexpected and really good. I was constantly flipping back to the beginning of the book to look at the character list so that I could keep track of them, but the book was good overall.

Must-Read submitted by goblue2911 on July 7, 2012, 3:35pm One of my all-time favorite books. Younger readers may not grasp all of the plot twists and switches from character to character, so I would suggest this to older readers, who can really appreciate Ellen Raskin's incredible plot.

Wonderful book submitted by Morgsush on August 30, 2012, 10:54pm When I first read this book in 5th grade, I though it was a very boring and confusing book. But reading it two years later, I finally understand the brilliance of The Westing Game.
Definitly a great read, though younger readers may not be able to appreciate it as much.

Good idea submitted by ehm on June 6, 2014, 7:09pm I've always loved books that have "games" in them, and this one really satisfied me. The characters are a little confusing and I would often mix them up, but once you get them straight it is a very enjoyable read. The plot is entertaining and funny, and the characters have little quirks that make them who they are. A very good book--highly recommended!

Not Profound, But Fun submitted by sdunav on August 23, 2015, 7:57pm The Westing Game was a great read for a summer day (and evening): relaxing, and interesting enough to keep me turning pages, but not so compelling that I couldn't put it down when it was time to go swimming or catch fireflies. It's the YA/older elementary kid's equivalent of Janet Evanovich - so I'm a little surprised that it won the Newbery award, actually. Maybe there were a lot of mystery lovers on the selection committee in 1979.

In a lot of ways, this reminded me of a cheesy 80's movie - something about the tone of the story, with its unabashedly greedy characters - and when I looked around the net, sure enough The Westing Game movie (also called Get a Clue!, but not to be confused with the 2002 Lindsey Lohan movie without an exclamation point) was made in 1997. Ray Walston played Sandy McSouthers and Diane Ladd played Berthe Erica Crow, but I've never heard of the rest of the cast. I guess it was a kind of a forgettable movie.

The Westing Game wasn't profound, but it was fun, especially if you like codes, clues, spooky mansions, and chess, and I'll bet I would have absolutely loved it if I'd read it when I was twelve.


Love it! submitted by icecreamandkitty on June 19, 2018, 1:16pm I just couldn’t stop reading this book till the very end. It’s so suspenseful! I recommend it to everybody in the entire universe!

Good Book submitted by leilawilder on June 24, 2019, 10:31am This book was a little confusing but overall really good. I love how everything comes together at the end and I love how the characters have very strong personalities.

The Westing Game submitted by Varshini on August 30, 2019, 9:19pm The Westing Game was one of my favorite mystery book sin 4th grade. It's a bit confusing at times, but everything will eventually make sense.

FAVORITE submitted by yanxia cao on July 20, 2020, 11:26am I love mystery, and the ending was so unexpected! I loved the plot twist at the end!

I think I needed to take notes submitted by Xris on January 18, 2021, 12:40am So many characters and so many clues to try and figure out, maybe I should have taken notes as I read it. I was inspired to read it after it being mentioned in The Parker Inheritance. Now I'd love to go back and read both of them again, to see what I've missed...but I have so many others waiting to be read.

A Children's Classic Well Worth Revisiting submitted by Meginator on July 22, 2021, 9:09pm This book won a Newberry Award, but with its complex multi-part ending(s) and its dryly ironic sense of humor it has a lot of appeal for any reader who enjoys a light, humorous mystery. The plot revolves around a puzzle presented in an eccentric millionaire’s will, with the named heirs (all residents of a new apartment building) paired off and challenged to piece together enigmatic sets of clues in order to win their full inheritance. The puzzle is quite cleverly composed and elegantly simple, but the real fun comes from watching the characters interact with each other. Each of the prescribed pairs is surprising, and Raskin manages decent character development given the book’s brevity and the rather large cast. Being a product of its time, the book does include some outdated language and a largely offensive portrayal of a recent immigrant, but its depiction of disability is surprisingly sympathetic and progressive. This often had me laughing out loud and I really enjoyed the reading experience; it’s one of those books that’s just fun, and I loved its inherent playfulness. It’s good at any age. 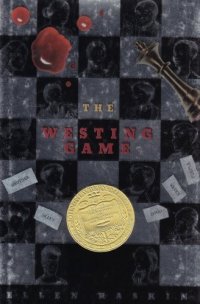