"Detroiters know their history well. Founded in 1701 by Antoine de la Mothe Cadillac, the city subsisted on a variety of industries: fur trading, stove building, and, of course, the automobile. Names such as Henry Ford and Charles Lindbergh resonate in Detroiters' common memory. Detroit's meteoric rise during the 20th century established the city as an influential leader in commerce, culture, and religion. This growth spawned the development of numerous businesses, organizations, and institutions, many now forgotten. Albert Kahn left his indelible mark. Mary Chase Stratton created a new art form. And Henry Ford II changed the course of his family legacy. Forgotten Detroit delves into the wellspring of history to retell some of these lesser-known stories within Detroit's rich heritage"--P. [4] of cover.

photos of detroit people submitted by Jackie77 on August 23, 2015, 1:33pm This is a good book full of photos from detroit olden days. It has a lot of photos of people rather than just buildings. Small descriptions are included with the pictures. 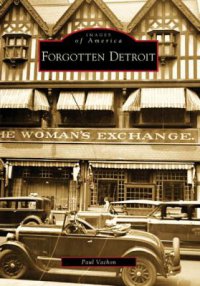