Fielding, Helen. Book - 1996 Fiction None on shelf No requests on this item Community Rating: 3.6 out of 5 2.0 Stars submitted by sugarmagnolia on July 11, 2011, 12:14pm After years of avoiding this book I've finally read it. I'd say my trouble was mostly an aversion to Renee Zellweger. Oh, and all of the super strange mania caused by the fact that Ms. Z had to GAIN 20 LBS FOR THE ROLL ZOMG to portray a woman who weighs 125lbs.
In any event, the book itself was humorous. Fielding did a good job of keeping the "diary" voice. This to me is classic chick-lit. The most immature, neurotic, self-obsessed, desperate thirty-something who can't seem to do anything right suddenly finds love of perfect-match who was right under her nose, and also super rich.
yea. i get the echoing of pride and prejudice, minus the whole depth of character, plot, social criticism, and well, decent prose.
if the character wasn't everything i hate about chick-lit characters it'd get three stars, but she's just so vapid and get's the dude for no real reason other than "because that's what happens in P&P." can we please do something else now?

A sassy fun read submitted by Lmd3577 on July 6, 2018, 2:36am I absolutely love this book it is a sassy fun chick lit read. I love how cheeky it gets in points it is so well worth the read.

Bridget Jones's Diary submitted by lstorc on June 27, 2019, 8:52pm I was expecting more based on how amazing the movie was. The book was too drawn out to be interesting. 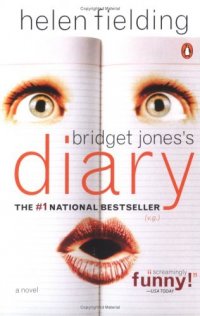