"An exquisite, blistering debut novel. Three brothers tear their way through childhood-- smashing tomatoes all over each other, building kites from trash, hiding out when their parents do battle, tiptoeing around the house as their mother sleeps off her graveyard shift. Paps and Ma are from Brooklyn--he's Puerto Rican, she's white--and their love is a serious, dangerous thing that makes and unmakes a family many times. Life in this family is fierce and absorbing, full of chaos and heartbreak and the euphoria of belonging completely to one another. From the intense familial unity felt by a child to the profound alienation he endures as he begins to see the world, this beautiful novel reinvents the coming-of-age story in a way that is sly and punch-in-the-stomach powerful. Written in magical language with unforgettable images, this is a stunning exploration of the viscerally charged landscape of growing up, how deeply we are formed by our earliest bonds, and how we are ultimately propelled at escape velocity toward our futures"-- Provided by publisher.

Engaging, but disturbing submitted by 21621031390949 on July 7, 2015, 11:20am I found this short little book to be disturbing. It reminded me of "The Glass Castle" by Jeanette Walls. While many people raved about her book, I was sickened by the terrible parenting and disastrous upbringing she had, and I just couldn't enjoy the book.

I feel similarly about this book; however I have just learned that it is fiction, not a memoir, which is what I thought it was the whole time I was reading it. Somehow this is changing how I view the book. Perhaps as fiction, I can put more distance between myself and the story. Rather than be traumatized by the terrible child-rearing, I can focus the high quality of writing. Torres writes in the chaotic, choppy, fierce style that creates and adds color to the story. The characters' lives are in fact chaotic, choppy and fierce; their truths are brutal.

It's a very short, but powerful read which should spark discussion in a book group.


So awful! submitted by bookher on July 9, 2015, 8:48am I totally agree w/the previous reviewer! I only read this because it was selected as my book club's book of the month but it was so painful to read about the neglect and abuse these 3 boys suffered growing up in a poor abusive family. I am only thankful that it was a very short book otherwise I never would have finished it.

We the Animals submitted by leighsprauer on September 14, 2018, 1:39pm We the Animals is (I think) a semi-autobiographical account of the author's childhood, as one of three boys, close in age, of parents who were too young, too poor, and too distracted to raise them well. He presents the abuse and neglect (both directed at the kids, and at his mother) straightforwardly, but doesn't demonize either parent - he humanizes them. Torres highlights moments of commitment, loyalty and love, even while describing and fully comprehending the trauma he experienced. I came away with the feeling that his parents were doing the best that they could, even if it was not enough.
I would have given the book higher than three stars if it had not been for the end. The choppy, abrupt style for which the book is known - and which complements the fierce, chaotic lives of the boys - sort of falls apart in the last fifth of the book. The style changes in some sections, and rather than feeling like that style reflected the more adult version of the boys, it just had the "I gotta get this book done" feel. Had the ending been more tight, I think I would be more likely to recommend this book. 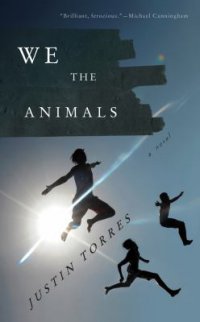