Some editions include a reader's guide.

What fantasy should be submitted by Beth Wiggert on July 19, 2007, 6:46pm This doesn't even read like fantasy. So real and touching, this book reads like a true memoir. Stunning in originality. I've never read anything like it!


Lovely Story submitted by misty98 on July 23, 2007, 11:53am I thought this book was so good, I've read it twice. The story moves quickly, and I enjoyed having to pay close attention to the action and the emotional story lines. A wonderful read!

Makes you think submitted by andrea on August 22, 2011, 11:50pm The complexities of time travel kept me thinking. Sometimes it was hard to wrap my brain around what time travel can and cannot accomplish in this story. The relationships are fascinating and well developed and the characters are very real.

Fantasy for those who don't "do" fantasy submitted by fizzleskittle on June 17, 2012, 12:02am I was reluctant to read this because fantasy isn't usually a genre I enjoy, but this was a great read. It is a little slow/hard to follow at first, but once you're hooked, you're hooked. This book is very emotional and upset me at the end! I felt like I was travelling while reading this and I couldn't help but connect to the characters.

Absolutely Love submitted by ksboes on June 14, 2014, 10:41am I absolutely love this book. It is well-crafted literature that pulls at your emotions from all directions. It does have some adult content, but it is not trashy in the slightest. If you enjoyed the movie, you will enjoy the book even more.

Summertime Read submitted by Peter Pasque on July 27, 2016, 1:07pm This is a great summertime read. It's sentimental and thought provoking.

Superb submitted by Meginator on August 15, 2017, 6:34pm The Time Traveler's Wife is such a wonderful book! It's high concept and handles its time travel nuances quite well, weaving them seamlessly into the story and directly addressing some of the paradoxes that necessarily arise. The relationship between Clare and Henry feels honest and deep and that final chapter is an all-time emotional punch to the gut (but in the best way), providing a beautiful ending to a wonderfully well-conceived and well-crafted novel. This novel is so good.

Not Worth the Hype submitted by zixyxuan on August 31, 2017, 10:18pm I watched this movie a couple of years ago, and this book has been on my TBR for the past seven years. My friends and I decided to read it together, I had a copy laying on my bookshelf, so I decided to pick it up. Not going to lie, this was disappointing. I mean, there are so many ways in which you can spin the premise of time-traveling to be exciting, but it really fell flat for me. There were three major problems I have with this story:

1. All of Henry and younger Clare's interactions felt really creepy. Like pedophilia creepy. Especially if the story is from Henry's perspective. The fact that a 41-year old man is having sex with an 18-year old, no matter how legal, really made me question whether I wanted to continue the book.

2. Why is everyone so conveniently wealthy? For me, it felt like everyone could just ignore their adult responsibilities so that Niffenegger could further the romantic aspect of the story. It was incredibly annoying because that was the only part of the story that I felt really indifferent towards.

3. There was absolutely no character development throughout the entire thing. There are people that have told me that they bawled over this book, but I didn't care much about either Clare or Henry. I would have expected Henry to have different life-perspectives and views as he aged and his interactions with Clare, but he is a very flat character. Henry and Clare meet. They fall in love. And all his problems with drugs and women disappear. Really? Cause I don't buy it. I didn't really see their relationship develop outside the fact that they were destined to be together.

Aside from all the problems, the story was original and interesting.

Enjoyable Read submitted by pchao on October 3, 2017, 8:08pm For those who don't read fiction often, this book is a nice dose of drama, mystery, and imagination. The romantic relationship that is well developed by Niffenegger and is a pleasurable read.

Too Long submitted by jmconnel on August 9, 2020, 5:32pm This book is too long. I get that a lot happens, but I could have done without details of the artwork, literature, etc.
I still finished this book after a long hiatus and give it a 4 star rating because I am a sucker for time travel and love stories and the ending had me trying to hide the tears rolling down my face while stuck on a plane next to a stranger. I would say the second half was a page-turner, and it probably helped I took a break in my reading because it let me separate rich annoying young Clare and hopeless druggy young Henry from their (somewhat) more mature adult selves.

Not my favorite submitted by Mary Grace Kennedy on June 12, 2021, 9:42am This novel was not my favorite the characters struggle with determinism and it seems like nothing happens unless they already know it happens from the future 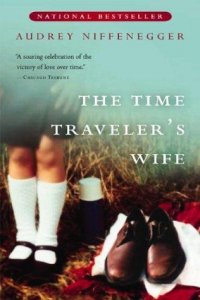