Early years -- Morehouse College -- Crozer Seminary -- Boston University -- Coretta -- Dexter Avenue Baptist Church -- Montgomery movement begins -- The violence of desperate men -- Desegregation at last -- The expanding struggle -- Birth of a new nation -- Brush with death -- Pilgrimage to nonviolence -- The sit-in movement -- Atlanta arrest and presidential politics -- The Albany movement -- The Birmingham campaign -- Letter from Birmingham Jail -- Freedom now! -- March on Washington -- Death of illusions -- St. Augustine -- The Mississippi challenge -- The Nobel Peace Prize -- Malcolm X -- Selma -- Watts -- Chicago campaign -- Black power -- Beyond Vietnam -- The poor people's campaign -- Unfulfilled dreams.
He was a husband, a father, a preacher--and the preeminent leader of a movement that continues to transform America and the world. Martin Luther King, Jr. was one of the twentieth century's most influential men and lived one of its most extraordinary lives. Now, in a special volume commissioned and authorized by his family, here is the life and times of Martin Luther King, Jr., drawn from a comprehensive collection of writings, recordings, and documentary materials, many of which have never before been made public. 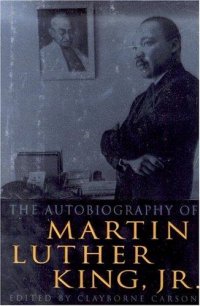