Darrow, a Red, which is the lowest caste in the color-coded society of the future, joins a revolutionary cell and attempts to infiltrate an elite military academy after witnessing the execution of his wife.

Ambitious Dystopia submitted by Joe on June 13, 2014, 10:38am This book was a lot of fun. Its not a new idea, but it introduces us to a really interesting worlds/solar system. The whole color system was really creative and I look forward to the next entry.

Brilliant Debut Novel submitted by AccountJD on July 14, 2015, 10:49am This book is awesome. Awesome in every way. Despite being derivative in some ways, I didn't find it to have an unoriginal feeling--in fact, I would suggest that that the final trilogy might come to overshadow the Hunger Games in terms of plot, world system, and characters. It is clearly so much more than just another dystopian novel trying to leech off of the Hunger Games's success. Looking forwards to the third coming out in January 2016.

Well done submitted by steveiew on August 5, 2015, 11:00am This book explores the familiar plot of breaking out of a caste system in a unique way. The characters are well developed and the plot makes the book impossible to put down.

Loved it submitted by KOH on August 8, 2017, 2:21pm I was engaged from the beginning all the way to the end, and was happy to learn there are two more books in the series!

Awesome! submitted by thedukeofparma on June 18, 2019, 10:43am I found this book to be a real page turner. I call it "the Game book" because it has elements of Ender's Game, The Hunger Games, and Game of Thrones, all rolled into one. Highly recommended.

Hunger Games wishes it were this good submitted by eknapp on August 26, 2020, 1:59pm One of the raft of youth-vs-dystopian-government novels that sprang up in the wake of Hunger Games...though this one far surpasses its parent.

This time we're on Mars 700 years in the future. The social structure of the solar system cribs the calcified, brutal caste system from Heroes Die, with strata labeled by colors à la Robert Jordan's Wheel of Time Ajahs. Golds rule. Coppers run the bureaucracy. Grays police, Yellows heal, Pinks are similar to courtesans, etc. At the bottom are the Reds, who lead short, brutal lives as slaves.

After being forced to watch his wife's execution for singing a song about freedom, our lowborn Red hero Darrow is drafted into a rebel organization, physically altered to look Gold, and sent to infiltrate his high-caste oppressors. The bulk of Red Rising is spent at a brutal Gold school, where students play a deadly Darwinian game of politics and warfare, learning the finer points of power and repression and setting themselves up for eventual careers in positions of entitlement and influence.

Red Rising sets out to test the concept of presumptive human rights. The idea that all people are created equal is termed "the Noble Lie" by the Gold aristocracy. Democracy is illegal. Birth determines worth. The author sets Darrow up to test modern notions of equality against this vile ideology in practical terms. To this end Red Rising examines different leadership styles as displayed by Darrow and his schoolmates. And it's a rollicking good time seeing how things shake out.

About the only thing I disliked was the clumsy definition of gender roles. Sometimes they're pretty traditional (the sexual violence, exclusively against women, suggests an entrenched misogyny). Other times more egalitarian or meritocratic (females are physically, politically, and militarily powerful and everyone is perfectly comfortable with this). It's like Brown failed to put any thought into this central aspect of social world-building. 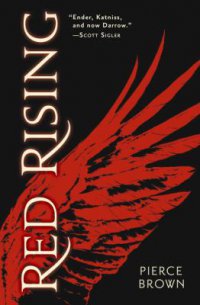