Name of the Wind "The tale of Kvothe, from his childhood in a troupe of traveling players, to years spent as a near-feral orphan in a crime-riddled city, to his daringly brazen yet successful bid to enter a difficult and dangerous school of magic. In these pages, you will come to know Kvothe as a notorious magician, an accomplished thief, a masterful musician, and an infamous assassin. But this book is so much more, for the story it tells reveals the truth behind Kvothe's legend"--From publisher description.

promising, but needed editing submitted by wfzimmerman on June 11, 2007, 7:08pm this promising debut has a lot of good things going for it, but could have used some aggressive editing. there are at least three self-declared "beginnings of the story", all of which could have been dispensed with, and this autobiography of a 30-year-old doesn't even reach age 18 by page 700. I was really interested around page 200 then gave up and started skimming around page 350.

Can't wait for the next one submitted by mrwaite on January 3, 2010, 6:05pm I get bored fairly easy by fantasy books if they are too slow or cookie-cutter. I thought this book was neither and was excited to read every page. Sure, he left a lot of room at the end for following books, but I'm waiting for those with bated breath. This book was fantastic and I would highly recommend it!

Original submitted by ark on July 6, 2011, 10:57am I love this book--If you are a Song of Ice and Fire fan, Lord of the Rings fan, or Harry Potter fan, it's right up your alley. Yet it manages to set itself apart from all these. It has magic without being too fantastical, a little romance without being cheesy, and a tragic hero without being cliched. The original form of the narrative--autobiographical, first person, told through a storyteller with pauses that bring you back to present time--sets it apart from its peers and is the perfect point-of-view to deliver this dystopic-hero tale.

Good submitted by 0liviap0pp on August 13, 2011, 9:17am A good book. This is a great fantasy book that sets itself from others.

Beautiful :) submitted by brielle on June 28, 2012, 10:49am This book is absolutely lovely. Because there is a decent summary above, I won't bore you with another. :)

I finally requested this book because more than 7 people recommended it to me - I figured it was worth the read, and it was. I fell in love with the Kvothe's world, and his adventures were exciting. I normally like fantasy, but I haven’t read anything good in a while – this book reminded me how much fun a new magical world can be. Unlike a Harry Potter book, there wasn’t a clear plot with a super-planned build up, but I sort of liked the casual, stroll-like way that the story was told.

Anyway, I can’t wait to read the sequel, and I highly recommend this book.

When I started reading it initially, I thought it was kind of cliched. It started slowly. But then it got incredibly engaging. I've since read the sequel and am eagerly awaiting the third book!


Extraordinary first showing submitted by dimuziom on June 14, 2013, 11:30am This book was particularly impressive for a first novel from a relatively young author. I hadn't heard about it until recently, and I am glad the sequel is already available, and hope the final book in the series will be out before too long. I was barely able to put this book down. I am usually slow to declare myself a fan of a new writer, but Patrick Rothfuss has my full attention from this point forward.

The storytelling style is a refreshing take on classic forms. The author has referred to it as a "panegyric", but as the subject of the story is the one telling it, it tends to be more frank and less full of exaggerated praise than a real panegyric would be, which is a good thing; the story is not short on heroic exploits and triumphs, but is also laced with loss, tragic flaws, and questionable decisions. The repetition of phrases such as "this is where to look for the beginning of the story" reminds us that a person's life story is full of new beginnings. The characters are memorable and well developed, the plot is engaging and nuanced, and there is plenty of mystery left by the end of the book to leave us hungry for more.


extremely good submitted by unknown on August 2, 2013, 9:56pm C. S. Lewis said of Lord of the Rings: "Here are beauties which pierce like swords or burn like cold iron; here is a book that will break your heart ... good beyond hope." To use it for this book is high praise, indeed, but accurate.

I've been reading fantasy since the 60's, and have lost track of the number of copies of LOTR I've worn out. Of the 1,000's of books sitting on my shelves, I can count on the fingers of one hand the ones that reach that level: The Fionavar Tapestry, the first Deryni trilogy, the Belgariad Epic, and the Riddlemaster of Hed. This pantheon now has a new member. Never have I read a book that was so engrossing, so quickly. I cannot praise it enough. Mr Rothfuss, where have you been hiding?


Making A Name submitted by Fevvers - STAR473 on August 28, 2014, 11:57pm An extremely strong debut for Rothfuss and his Kingkiller Chronicles. I found the frame story a bit confusing at first but the beauty of the prose kept me hooked. It's very sprawling, atmospheric, and dark without being unpleasant to read.

Amazing submitted by steveiew on June 24, 2016, 2:02pm One of the best fantasy series still being written.

Absolutely stunning submitted by sueij on July 23, 2017, 4:17pm My 210th book listed on GoodReads, and only my 22nd to get 5 stars. This book is excellent. A great big huge sink-your-teeth-in fantasy. Great characters. Great plot. Creative new universe. Great writing style. Great mystery. Great twists. The only thing *really* wrong with this book is that the sequel hadn't been written when the first one came out (the third still hasn't).

My only other complaint is that the pacing slows a bit around the topic of the main character chasing his perfect girl. Compared to the rest of the story that part doesn't drive forward as interestingly. But I can live with that.


Breathtaking submitted by lfmarcus on August 17, 2017, 8:19pm One of my favorite books, and certainly one of my favorite authors. I also highly recommend the performance of the audio book, I was quite impressed with that narrator! The story is dense, yes, but there's so much humor in it, and it just carries you along for the ride as you grow closer to each of the characters. I cannot wait for book three to come out!

A great set of books over 1900 pages of reading submitted by Kikumatsu97 on June 15, 2018, 4:26pm The name of the wind is book one of the Kingkiller chronicles and yes, Pat Rothfuss does have a long winded writing style, but when telling the story, key points are shared in a way that says he too loves the story and conveys it in such way that you start to be fine with slowing down and reading each section like prose. It's a very great telling of a boy's adventures as he takes opportunities he's been given and is challenged and how he fights back against his foes and learns a lot. It's a great book, and many people eagerly await a third installment.


Amazing Fantasy Adventure submitted by a0710 on June 22, 2018, 3:30pm Patrick Rothfuss has an astonishing capacity for storytelling. You will not want to out the book down, and you will think about it long after you do. For fans for world building, magic, a multifaceted cast of characters and excellent prose, this book is for you.

Great setting; okay protagonist submitted by terpsichore17 on July 26, 2018, 10:16am This was a fun and quick read, but slowed by the fact that I kept getting frustrated with Kvothe. He’s so smart but so stupid sometimes – an absolute Gryffindor. Which is the one thing that saves him from being a Gary Stu, I guess.

Interesting concept of magic; rather trope-y, not that there’s anything wrong with that.


Name of the Wind submitted by SBNB on August 5, 2018, 3:15pm This is a longer book, but it doesn't feel dense or long-winded (unlike George R.R. Martin's stuff). The writing is amazing. Rothfuss has a true talent. The story is great. I can't wait for the third book to be released. Check out the 10th anniversary edition, if possible. There are extra things included in the back of the book about pronunciation, currency, etc.

Best Fantasy since Harry Potter submitted by Princess Cimorene on August 15, 2018, 5:43pm It has been a while since I was so completely absorbed by a magical world. I love the depth of the one that Rothfuss has created, and I can't wait to see where the trilogy goes. It is so complex, original, and filled with interesting characters and plot points.

Long but worth it submitted by gxtan on August 31, 2018, 10:39am Starts out kind of slow, but picks up after the first hundred pages or so. Very well written, and the plot has multiple aspects to it without becoming overly convoluted. The main character manages to be likeable despite not being perfect, and sometimes he's not even very nice or smart, but you kind of find yourself rooting for him anyway.

Normally not into fantasy but this did the trick submitted by labelleh on July 26, 2020, 7:17pm A friend of mine let me borrow this book at the start of quarantine. I was desperate for new reading material, so I sat down with minimal expectations given the genre and premise. Pleasantly surprised by the ease of reading and level of intrigue. The whole story could have gone without the romance arc, though. The female love interest was not interesting or unique - she was just elusive.... being absent is not a personality trait, Patrick Rothfuss. Put some work into your female characters.

Rewards rereading submitted by severian on June 25, 2021, 2:32pm A rare fantasy book that really rewards re-reading! Lots of puzzles and mysteries that don't seem obvious the first time round.

A Bit of A Long Haul submitted by no_ur_onions on August 22, 2021, 4:45pm This is a long book, but it's well written enough to more than make up for that; I finished it in days. The main character is incredibly dumb while also being remarkably intelligent, and I've met at least three people just like him (though mostly without the tragic backstory, luckily (WARNING: this book is SAD, all caps necessary)). The writing more than makes up for that too, turning what could easily have been intolerable stupidity into more of a character quirk. Maybe don't read it until the series is finished though (which will likely be a while), not knowing how the story ends is more annoying than even the teenaged-bravado. 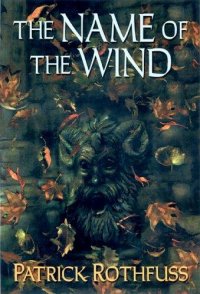 SERIES
The kingkiller chronicle
day one.