Mad as Hell : : the Making of Network and the Fateful Vision of the Angriest man in Movies

Itzkoff, Dave. Book - 2014 None on shelf No requests on this item Community Rating: 0 out of 5 ""I'm mad as hell, and I'm not going to take this anymore!" Those words, spoken by an unhinged anchorman named Howard Beale, "the mad prophet of the airwaves," took America by storm in 1976, when Network became a sensation. With a superb cast (including Faye Dunaway, William Holden, Peter Finch, and Robert Duvall) directed by Sidney Lumet, the film won four Academy Awards and indelibly shaped how we think about corporate and media power. In Mad As Hell, Dave Itzkoff of The New York Times recounts the surprising and dramatic story of how Network made it to the screen. Such a movie that rarely gets made any more - one man's vision of the world, independent of studio testing or market research. And that man was Paddy Chayefsky, the tough, driven, Oscar-winning screenwriter whose vision - outlandish for its time - is all too real today. Itzkoff uses interviews with the cast and crew, as well as Chayefsky's notes, letters, and drafts to recreate the action in front of and behind the camera at a time of swirling cultural turmoil. The result is a riveting account that enriches our appreciation of this prophetic and still-startling film. Itzkoff also speaks with today's leading broadcasters and filmmakers to assess Network's lasting impact on television and popular culture. They testify to the enduring genius of Paddy Chayefsky, who foresaw the future and whose life offers an unforgettable lesson about the true cost of self-expression"-- Provided by publisher. 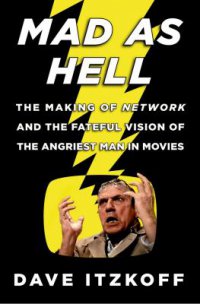