Terror in the City of Champions : : Murder, Baseball, and the Secret Society That Shocked Depression-Era Detroit Something Afoot, 1933-1934 -- Grand Plans, 1935 -- Joy and Terror, 1936.
Detroit 1936: In a city abuzz over its unrivaled sports success, baseball fan Dayton Dean is arrested for murder. Though said to have a childlike intelligence, Dean possesses a vivid memory and a hunger for attention. He gives police a story about a secret Klan-like organization called the Black Legion, responsible for countless murders, floggings, and fire bombings. The Legion has tens of thousands of members in the Midwest, among them politicians and notable citizens--even, possibly, a beloved Detroit athlete. When Deans revelations explode, they all seek cover. Award-winning author Tom Stanton's stunning work of history, crime, and sports, weaves together the terror of the Legion with the magnificent athletic ascension of Detroit. Richly portraying 1930s America, and featuring figures like Louis, the country's most famous black man; Jewish slugger Hank Greenberg; anti-Semitic Henry Ford; radio priest Father Coughlin; and J. Edgar Hoover, Terror in the City of Champions is a rollicking true tale set at the confluence of hard luck, hope, victory, and violence.

Exceptional. Very worth reading. submitted by rats on May 20, 2021, 11:27pm Is this a book about sports or a terrorist organization and the society that covered it up? Should be part of the curriculum in Michigan's high schools. It describes Detroit in 1936 when the Tigers, the Red Wings and the Lions all won their championships. Joe Louis was winning. Corruption among politicians, district attorneys and police was just as bad as it was in the 1960s. Police killed black men and boys and were never investigated. The Black Legion--a white supremacist group that was so vicious it was denounced by the KKK. Want to understand Detroit and southeast Michigan? Study this book. 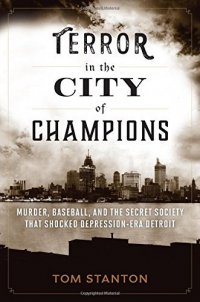