The Wretched of the Earth Translation of: Damnés de la terre.
Originally published: Damnés de la terre. Paris : F. Maspero, 1961.
Foreword: Framing Fanon / by Homi K. Bhabha -- Preface / by Jean-Paul Sartre -- On violence ; On violence in the international context -- Grandeur and weakness of spontaneity -- The trials and tribulations of national consciousness -- On national culture ; Mutual foundations for natural culture and liberation struggles -- Colonial war and mental disorders ; Series A ; Series B ; Series C ; Series D ; From the North African's criminal ; Impulsiveness to the war of national liberation -- Conclusion -- On retranslating Fanon, retrieving a lost voice.
"Frantz Fanon was one of the twentieth century's most important theorists of revolution, colonialism, and racial difference, and this, his masterwork, is a classic alongside Orientalism and The Autobiography of Malcolm X." "The Wretched of the Earth is an analysis of the psychology of the colonized and their path to liberation. Bearing singular insight into the rage of colonized peoples and the role of violence in historical change, the book also incisively attacks postindependence disenfranchisement of the masses by the elite on one hand, and intertribal and interfaith animosities on the other. A veritable handbook of social reorganization for leaders of emerging nations, The Wretched of the Earth has had a major impact on civil rights, anticolonialism, and black-consciousness movements around the world. This new translation updates its language for a new generation of readers and its lessons are more vital now than ever."--BOOK JACKET. 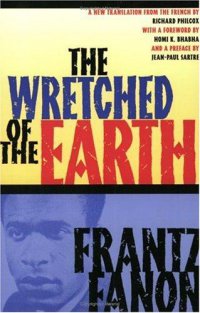