The Long way to a Small, Angry Planet "When Rosemary Harper joins the crew of the Wayfarer, she isn't expecting much. The patched-up ship has seen better days, but it offers her everything she could possible want: a spot to call home, a chance to explore the far-off corners of the galaxy and some distance from her past. And nothing could be further from what she's known than the crew of the Wayfarer."--Page [4] of cover.

Fun Sci-Fi Romp submitted by corywill86 on June 20, 2018, 10:38am This was a really fun book about a crew of well-intentioned space travelers, their relationships with each other, and their relationship with their world. The female characters are so well written, as are the alien characters. There's an underlying theme of xenophobia and the struggles of cross-cultural understanding.

Five Stars submitted by Avliss on June 24, 2018, 4:45pm This is literally the best sci-fy story I've read in a long time. All of the characters, even secondary ones, are wonderfully well written and interesting. And I have to say that this is one of the most fascinating takes on alien biology that I've come across - it's not just, "a blob monster with the ability to talk" or "humanoid that is more blue". There's a diverse range of alien characters, and the author doesn't gloss over the little details about how they adjust and compromise to live together.

A fun exercise in world-building submitted by kuz_a on July 16, 2018, 1:18pm The world that Becky Chambers sets up in this novel is intricate and delightful. The alien species have well thought out and imaginitive cultural structures. It is fun to spend some time in this book; my only complaint is that the world tends to overtake the plot a little bit. Don't get me wrong, I love a good character driven storyline but here the storyline could use more story.

Enjoyable submitted by ashflowtuff on July 26, 2018, 9:12am I really enjoyed this book. It's a fun sci-fi adventure, but what I like most about it was the diverse, interesting crew, who all were trying to do their best and look out for each other.

Feel-good scifi submitted by Princess Cimorene on July 20, 2020, 11:19pm I tend to prefer fantasy to scifi, but if more science fiction was as fun as this, I think that might change. It's not that every part is happy, but it does have an uplifting vibe and a good ending. The cast of characters is so lovable and reminds me of the show Firefly, and the portrayal of non-human species is both creative and convincing.

Optimistic Sci Fi submitted by severian on June 25, 2021, 2:55pm This is a fun, slow paced story that focuses on characters over plot. Its optimism is a very pleasant surprise -- worth reading!

Character- and world-driven story about found family (on a spaceship!) submitted by mwatson on July 8, 2021, 3:02pm Perfect if you love the trope of found/chosen family, or escapist stories that imagine a more accepting future. One of the best sci-fi books I've read in terms of the way alien cultures are treated and developed. There are many alien species depicted in this book (and even more in the companions), and each has a unique appearance, biology, culture(s), and way of interacting with other species. (Including humans--there's a clear cultural disparity between spacefaring "Exodan" humans, and those who live in colonies on Mars or Jupiter's moons. Also, the book doesn't suffer from the common scifi syndrome of "every human with melanin vanished at some point before interstellar travel was developed," which is refreshing) It's clear that the author put a lot of thought and care into developing the worldbuilding, and it creates a world that feels natural and welcoming. The characters in the book are equally well-developed, and the author takes her time letting you get to know each and understand their relationships. This is not a book to read for the plot, but for the worldbuilding and character development.

Perfect tension at all levels submitted by Susan4Pax -prev. sueij- on June 12, 2022, 12:19pm Oh, how delightful! I couldn’t put this book down. It’s a great take on interstellar society, life on a long-haul transport, interactions with a new alien species, and inter(personal?) interactions on a multispecies ship. There is great tension at all of the levels: between individuals, between individuals and groups, and between groups and society. That makes for excellent storytelling and excellent writing.

My one quibble is that the white author has created a future where most humans are brown-skinned, but in a totally white-worldview way. Having established that almost everyone is brown, she then created one funny scene about the pink guy, and then race *never again plays a role*. Sure, humans have differences, but they are entirely about philosophical differences. This is how the world works for white people… we want to see color, acknowledge it, and then pretend it doesn’t matter. The reality is that for non-white people, this *isn’t* how race works, because race is always a factor in experience because systems and history and power are involved. This is why it matters that POC provide critical feedback on texts in development. Can an author write what they want? Yes, of course. But if Chambers wants to include “everyone is brown,” then it matters that this goes deeper than just the surface level written here. So it looks inclusive, but is a miss in the end.

Still, the book is fantastic and I can’t wait to read the next installment.


Almost everything I wanted submitted by rjfernandorizzo on July 11, 2022, 12:58pm This book was almost everything I could possibly ask for in a space opera. I love a character-driven piece with a strong ensemble cast, and this gave me exactly that, with some of the most varied and nuanced alien species/cultures I've had the pleasure of encountering. The episodic format granted each member of the Wayfarers a turn in the spotlight and a glimpse into their unique galactic (and personal) perspective. I cared about every one of them - one of my favorite feelings as a reader.

On the other hand, there were things I really wanted from this book that I just didn't get. The broadly acclaimed queer representation fell flat for me, as sex and gender were pretty exclusively portrayed as biological, binary phenomena in almost every one of Chambers' fantastical alien cultures. There's one mention of a species that biologically transitions into something other than male or female as a natural part of their life cycle, but the bioessentialist factor remains. [Spoiler alert] The one character to use nontraditional pronouns - a plural pair, biologically male - does so due to a viral infection, and is literally cured of their condition against their will at the end of the story. Left me wanting better. 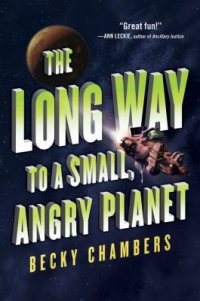