solid sequel submitted by KimB on August 31, 2018, 10:56pm it's not as gripping as the first book, but it's a decent book, as far as a continuation of the series goes.

Fantasy is a wonderful vehicle for asking questions submitted by Susan4Pax -prev. sueij- on July 27, 2019, 5:01pm I still loved this book, but it did not *grip* me the was The Fifth Season (the first of the trilogy) did. I think this was in part because the technique of the storytelling... the way the characters' stories were told and melded... was gripping in such a powerful way to me in the first book and that could not be repeated in the second book. (I can't say more without spoilers.) I also felt like the politics of the factions who are in conflict was made more clear, in that I am waaaay more clear that there are multiple sides, and even that the sides contain multiple perspectives, but at the same time I feel like the politics are way more muddy, in that at the end of the book I have no bloody idea who is on what side, who wants what, who is aligned (or against) who else, or where almost anyone stands.

On the other hand, the process of the world and society coming apart is fascinating, and the struggles for survival and leadership make for a wonderful story. So many characters continue to struggle with their histories and their nature, and how those fit into the new Season they are living in. Who has power and who does not, and what *kind* of power, are ever-relevant questions. Fantasy is a wonderful vehicle for asking relevant questions of our own lives, as always.


Sticks with you submitted by Princess Cimorene on July 21, 2020, 12:57am Power. Oppression. Injustice. Strength. Determination. Fire. These are some words that come to mind when I think of this book. The series as a whole is really well-crafted, with lots of action, anger, revenge, and fierce love. Everything about the story feels fervent, but nothing feels forced in the writing. I thought about this book for days after I finished reading it, and that, to me, is the mark of a really meaningful story.

A Good Second Installment submitted by KatieD on August 19, 2021, 11:30am This book isn't quite as fast-paced as The Fifth Season, but there is a lot of important character and world-building elements that come into play in this novel. I found it a bit harder to get through, but still enjoyed it overall! 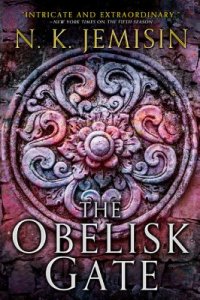