"Collecting books can be a dangerous prospect in this fun, time-traveling, fantasy adventure from a spectacular debut author. One thing any Librarian will tell you: the truth is much stranger than fiction... Irene is a professional spy for the mysterious Library, a shadowy organization that collects important works of fiction from all of the different realities. Most recently, she and her enigmatic assistant Kai have been sent to an alternative London. Their mission: Retrieve a particularly dangerous book. The problem: By the time they arrive, it's already been stolen. London's underground factions are prepared to fight to the death to find the tome before Irene and Kai do, a problem compounded by the fact that this world is chaos-infested--the laws of nature bent to allow supernatural creatures and unpredictable magic to run rampant. To make matters worse, Kai is hiding something--secrets that could be just as volatile as the chaos-filled world itself. Now Irene is caught in a puzzling web of deadly danger, conflicting clues, and sinister secret societies. And failure is not an option--because it isn't just Irene's reputation at stake, it's the nature of reality itself.."-- Provided by publisher.

Fantasy Fun with Libraries submitted by sdunav on June 17, 2017, 9:40am Libraries, alternate worlds, Sherlock Holmesian heroes, dragons, what's not to like?

Not your ordinary Library! submitted by teri on June 28, 2018, 4:29pm Any story that features libraries grabs my attention, and this one didn't disappoint. An ordinary librarian is given a mission to retrieve a dangerous book from an alternate universe? Yes! The doors of the labyrinthian library lead to these alternate universes? Yes! Magic, technology, werewolves, vampires, and the fey fairyfolk all come together to make this an exciting, well written read.

A bit of a mess, but entertaining submitted by ckfinzel on August 18, 2018, 11:08pm This book is very original, but a bit on the scattered side. It can't seem to make up its mind what it is. Steampunk? Sci-fi? Espionage thriller? Fantasy? Normally I would score genre-blending as a positive, but it's a hard thing to do well. It takes a while for the story to find its feet, and it stays shaky once there. The basic premise of a library being a secret shadowy spy organization is intriguing enough, but the author throws a whole lot of logistical world building knowledge at the reader very quickly, in medias res, in a manner that somehow doesn't allow the reader to be drawn in. The characters are interesting shells, but their traits and relationships are not very developed. The world and plot are based on a mishmash of many different elements of magic, science, linguistics, logic, and folktale, none of which are fleshed out or well-established enough to give the reader a cohesive picture of the world the author is trying to create. It's a bit of "let's throw these things together and see what sticks." The narrative voice and writing style work well, and it's a very unique read, once you get past the chaos.

Catnip for bibliophiles submitted by mowjac on January 23, 2019, 7:23pm Libraries, librarians, daring heroines, multiple universes. It may be everything but the kitchen sink, but it is loads of fun as well. Highly recommended, entertaining read. 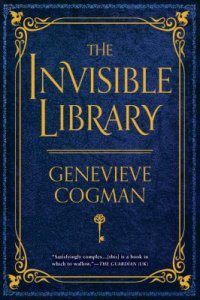