As plague ravages the overcrowded Earth, observed by a ruthless lunar people, Cinder, a gifted mechanic and cyborg, becomes involved with handsome Prince Kai and must uncover secrets about her past in order to protect the world in this futuristic take on the Cinderella story.

Awesome submitted by Morgsush on June 25, 2012, 5:43pm A great book that puts a twist on the classic Cinderella story (did I mention that it involved cyborgs?).

Spectacular submitted by alumeng.ajl on June 26, 2013, 5:37pm This is by far one of my favorite books. I love Cinder and all of the other characters. I thought that it was just wonderfully written, and the twists on the classic Cinderella tale were amazing. The big reveal at the end was a bit predictable, but it was still fun, and I'm sure that future books will pay off. Everyone should definitely read!

Love it submitted by leett on July 4, 2013, 3:09pm I loved this book. The romance is slow. Love that. But this series is taking a long time to come out.

Pretty good book :) submitted by gzheng on July 10, 2013, 1:56pm This was a good variation of Cinderella. I wish the author would write like a sequel to this book instead of different stories. i wish the series came out faster,

LOVE!!! submitted by Mackay2002 on July 16, 2014, 8:46pm Agree that the book is predictable but very well written with interesting characters. I loved it!

Must read! submitted by MCharania on June 25, 2015, 7:40pm Cinder was very original because it was about this whole new era and about robots and a civilization on the Moon! But it was also very unique because it was kind of based on original the Cinderella story. The whole series is also recommended to readers who like fantasy and science fiction.

cinder submitted by avrogers1 on June 24, 2017, 4:06pm Cinder is an interesting twist on a classic fairy tale

FINALLY something new! submitted by nsvinicki on August 8, 2017, 12:19pm My love for science fiction and fairy tales FINALLY in one book!

Cinder is the first in a series of four called the "Lunar Chronicles" and tells the story of a young cyborg named Cinder. She is Meyer's take on the Hans Christen Anderson tale of Cinderella, and here is an abused adopted girl whose adoptive father saved her life by augmenting her body with cybernetics and prosthesis after a mysterious cataclysm.

Earth is plagued by a disease that strikes without warning. The only people immune are the Lunar race, who reside on the moon. They are at war with Earth, but Earth trying to form an alliance to get access to a plague cure created by the Lunars. This political battle comes crashing into Cinder's life when she meets the crown prince in the market one fateful morning. This begins a series of twists and turns that delves deep into Cinder's mysterious past.

This book is amazing! submitted by Pidge_Gunderson on June 15, 2018, 5:31pm This is a book for people who like twists and turns and tons of action!

Strong Female Protagonists :) submitted by mwatson on August 30, 2018, 11:32am I've loved this series and all of Marissa Meyer's books since I first discovered them. Fractured fairy tales are such a fun genre, especially when they challenge the gender stereotypes present in a lot of old fairy tales. And I love the creative sci-fi technology! Combining the two genres is such an original idea.

My favorite thing about Cinder, and the Lunar Chronicles series as a whole, is the diverse and powerful female leads. Each of them has different personalities and skills and Marissa Meyer really brings them to life as nuanced, realistic characters. Highly recommended!

If you read the whole 4-book series (Cinder, Scarlet, Cress, Winter) and want more, Marissa Meyer has written several spinoff/companion stories: Fairest, a prequel about the villain Levana; Stars Above, a collection of short stories that includes backstories for several characters, as well as a reunion scene set after the end of the series; and Wires and Nerve, two graphic novel spinoffs about the unforgettable android Iko.


Cinder submitted by c_zhang on June 27, 2019, 10:46pm I really like the retelling of classic fairytales with this series. It's gripping and interesting, and the plot is so intertwined with the other books it's crazy. At some points it's devastating, other points victorious. It's twisty and turny and a keep you on the edge of your seat book.

Cinder submitted by lstorc on July 17, 2019, 2:54pm Cinder is very entertaining and the pacing makes it difficult to pur down. The characters are interesting.

Lunar Chronicles series is wonderful submitted by barbfoster on October 20, 2019, 3:02pm Cinder, and the whole Lunar Chronicles series has been an excellent read; love all the characters. Countless times adversity stopped Cinder and her friends and they continued to find a way to persevere. Recommend to teens and adults!

One of my favorites! submitted by SakanaUshi on June 12, 2020, 4:03pm I have read this book many times, along with the rest of the series. The last time I read the series, I did it in less than a week, because I love it so much!

Cinder submitted by madagascar on June 12, 2022, 8:18pm I give this book a 4.5. Really engaging and interesting. My favorite book in the four book series is Scarlet (The second book).

An Great Read submitted by The Book Broken Girl on June 22, 2022, 5:18pm Cinder was an amazing read for me, as I like Sci-Fi, Fantasy, and fairy tale based books. I look forward to getting Scarlet from the library. I highly recommend it to all YA lovers.

Pretty good book submitted by lnschram on August 7, 2022, 11:42am Popular and a good read, a must read for teens

Amazing submitted by meerakmr on August 19, 2022, 2:55pm A great book! It was so different and the originality of the plot combined with Meyer's great writing makes this book, and the rest of the series, a fantastic read. 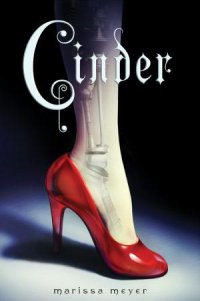