"Librarian-spy Irene and her apprentice Kai are back in the second in this "dazzling"* book-filled fantasy series from the author of The Invisible Library. The written word is mightier than the sword--most of the time... Working in an alternate version of Victorian London, Librarian-spy Irene has settled into a routine, collecting important fiction for the mysterious Library and blending in nicely with the local culture. But when her apprentice, Kai--a dragon of royal descent--is kidnapped by the Fae, her carefully crafted undercover operation begins to crumble. Kai's abduction could incite a conflict between the forces of chaos and order that would devastate all worlds and all dimensions. To keep humanity from getting caught in the crossfire, Irene will have to team up with a local Fae leader to travel deep into a version of Venice filled with dark magic, strange coincidences, and a perpetual celebration of Carnival--and save her friend before he becomes the first casualty of a catastrophic war. But navigating the tumultuous landscape of Fae politics will take more than Irene's book-smarts and fast-talking--to ward off Armageddon, she might have to sacrifice everything she holds dear.... INCLUDES AUTHOR INTERVIEW"-- Provided by publisher.

Alternate Venetian Past submitted by sdunav on June 17, 2017, 9:55am This is a light read, set mostly in an alternate historic Venice. Although I enjoyed Irene, Kai, and Vale's continued adventures, this volume didn't grab me the way the first in the series did. For one thing, there weren't enough books and libraries in it! There was a fair amount about the the art and importance of story-telling, however, and Cogman's world is an undeniably an interesting one.

The train! submitted by rcackerman on August 4, 2020, 6:57pm Similar to the other reviewer, I found this to be a light read but it didn't grab me as much as the original. That said, it was still a great book. I love how Cogman builds whole universes; I'm incredibly impressed by anyone who can do world-building on one world, let alone hundreds. There are also some clever twists and fun surprises - and a fae train, which - how cool is that? 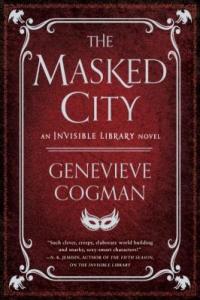