"An audacious, darkly glittering novel about art, fame, and ambition set in the eerie days of civilization's collapse, from the author of three highly acclaimed previous novels. One snowy night a famous Hollywood actor slumps over and dies onstage during a production of King Lear. Hours later, the world as we know it begins to dissolve. Moving back and forth in time-from the actor's early days as a film star to fifteen years in the future, when a theater troupe known as the Traveling Symphony roams the wasteland of what remains-this suspenseful, elegiac, spellbinding novel charts the strange twists of fate that connect five people: the actor, the man who tried to save him, the actor's first wife, his oldest friend, and a young actress with the Traveling Symphony, caught in the crosshairs of a dangerous self-proclaimed prophet. Sometimes terrifying, sometimes tender, Station Eleven tells a story about the relationships that sustain us, the ephemeral nature of fame, and the beauty of the world as we know it"-- Provided by publisher.

Station Eleven submitted by SBNB on June 21, 2015, 9:44pm Very detailed. It draws you into the moment. Also very depressing.

Station Eleven submitted by Judeyblu on July 18, 2015, 2:10pm Starting from moment and patient zero, we follow the rebuiliding of the nation.
Of course, we do this in Michigan.
And there is a comic book.
And Shakespeare, lack of dentists, lots of walking, and an airport.

In short, there is no way I can review this book.
Please read it and you try.
You'll really like it.
(Get the audio- it's great for a long trip.)

A surprise! submitted by Kikumatsu97 on July 26, 2015, 8:15pm It’s a set-up you may think you’ve seen before: a deadly flu kills off 99% of the population, the survivors walk the traffic blocked roads and gather in groups whilst murderous bands and religious cults, led by demonic figures, stalk the good guys. But this time it’s told in a very different way. It's certainly not a replaying of Stephen King’s The Stand, in my view this book has more in common with the work of Jonathan Franzen, William Boyd or Donna Tartt.

Station Eleven submitted by JoCeAn on June 19, 2017, 9:39pm I thoroughly enjoyed this book. One of the best books I have read this year. Hard to put down.

Stunningly Good submitted by Meginator on July 21, 2017, 10:39pm Station Eleven is a rare novel insofar as it manages both to share a compelling, character-driven story and provide a powerful meditation on the meaning and power of art (especially theater). The story effectively moves through time to show the onset, escalation, and results of an apocalyptic pandemic as experienced by a small, yet diverse, cast of characters. The prose is beautiful and the book's inevitable mix of tragedy and triumph resonates long past its final page. This book is a stunning achievement.

incredibly good submitted by KOH on August 2, 2017, 7:46pm The best thing I can say is don't read anything about this book and just experience the story unfolding as you go. It's excellent.

so interesting! submitted by ktwei on August 24, 2017, 2:32pm This was assigned as a summer read for school and the plot is very interesting.

Unusual submitted by lballard on June 16, 2018, 6:13am An interesting take on a future dystopia. This one is more disturbing than most because of how possible it is that this could happen. It’s a bit less believable because it’s set around here. In the south you wouldn’t have the problem of winters.

Couldn't Put It Down submitted by kleguiz on June 18, 2018, 9:50am A wonderful, descriptive story that gets better, page by page. Since the setting is Toronto/the Great Lakes region of the US, there are moments where you can "see" what's happening in the story. I highly recommend this book!

The Most Chill Apocalypse Ever submitted by thartj on July 8, 2018, 3:45pm This is the apocalyptic tale for people avoiding adrenaline. It opens with the death of an actor and proceeds to tell the story of several people connected to him as the world falls away. The primary center was a little girl in an adaptation of King Lear who was sort of friends with the actor and is on stage with him when he has a heart attack. That night her parents fail to pick her up... the epidemic has begun... (flu, who would have thought the world would end with flu? [/sarcasticreferraltomyownfluapocalypsetale] She evetually becomes part of a troup of traveling musician/actors who roam fro town to town through the apocalypse.

The story structure is very clever, but it had a detachment to it. All the bad stuff is told in past perfect... it had happened... so there is never any real fear--the stakes didn't feel as high as they do in most apocalyptic stories. I enjoyed reading it and it was a totally unique take on the end of the world, but I do miss the adrenaline.

Great submitted by anacoluthon on July 12, 2018, 11:09am I'm not usually a fan of post-apocalyptic stories, but this one really drew me in.

Absolute favorite... author is incredible with foreshadowing submitted by sueij on July 21, 2018, 10:24am I'm sure I knew what this book was about when I added it to my To Read list, but I had since forgotten, and prefer to go into books blind (without reading the jackets). So the name and cover gave me the impression that this would be science fiction of some sort, and I was heartily surprised when it was no such thing. It's the story of a virus that wipes out nearly all of humanity, of life before and after it, of what is important when not much is left (the traveling artists have a sign that says "Survival is insufficient"), and how a few lives have crissed and crossed and intersected in ways that no one could foresee.

The author does an absolutely BRILLIANT job with moments of foreshadowing in the early part of the book, but even better, she sets up mysteries and questions and large and small unknowns that resolve in natural ways as the book progresses. I'm not sure I've ever seen a book do such a stunning job pulling threads together as it wound towards its close. This book was on my mind constantly throughout my time with it.

My second time through, I read the paper book for book club. I loved it just as much and can't wait for the discussion.

Appealing to a wide audience submitted by emilymcguire on June 16, 2019, 2:43pm I found this book interesting on a variety of levels - and science fiction / apocalyptic stories are definitely not my thing. The setting was interesting and familiar (around the Great Lakes) and the story was compelling.

Interesting submitted by crystaljmcdowell on June 19, 2019, 1:17pm This is an interesting book. Dealing with a post-apocalyptic Michigan/Ontario, its familiar yet foreign. I loved that the main character wasn't one that had many lines or much story but has the largest effect on every narrator. These stories aren't my thing usually but I found this one to be well written, intriguing, and well done.

Fascinating and Michigan Relevant submitted by Maria Maguire on June 24, 2020, 11:32am I've been meaning to read this book for years, and finally got around to it. I was so drawn in that I read through it in just two days! Interesting storyline and follows several different characters throughout the events. I also loved that it takes place in Michigan, albeit in the apocalyptic future.

"Survival is Insufficient" submitted by jaromatorio on July 24, 2020, 11:36am Of all of the books about zombie apocalypses and societal breakdowns as I’ve read recently (not sure what that says about me rn but whatever), ‘Station Eleven’ feels the most realistic and is definitely the most heart wrenching, beautiful, and terrifying.⁣
⁣
‘Station Eleven’ tells the story of the world immediately preceding and in the ~20 years after the outbreak of the Georgia Flu, which annihilates about 99% of the world’s population. The story is told from the prospectives of a handful of characters who are all connected by one man—an aging actor with a complicated past—who dies during a performance of King Lear on the eve of the cataclysmic outbreak. ⁣
⁣
Because the story is told from the various viewpoints, the reader is able to develop a more full understanding of the unfolding of the collapse of society and appreciate the extraordinary efforts to rebuild some semblance of normalcy after the catastrophe. ⁣
⁣
Unlike many post-apocalypse stories that focus solely on the violent fight for survival immediately following an apocalyptic event, ‘Station Eleven’ is more focused on what comes after, and how humans’ desire for connection, beauty, art, and history transcend even the most dramatic circumstances. ⁣
⁣
This book really made me appreciate the things we tend to overlook in day-to-day life—the sound of an airplane overhead, the glow of city lights, the joy of listening to beautiful music or seeing a great play. Because, as the caravan bumper sticker says “Survival is Insufficient”. ⁣
⁣

slow build to...the end submitted by apknapp on August 16, 2020, 9:31am I can't decide if I just liked this or really liked it. The story was told...quietly, calmly, despite the inherent drama of the events described. Interesting to see the characters' connections revealed gradually in interspersed flashbacks. The deliberate pacing made me think the story was going to take off any minute, like all of this has just been intro, but that never really happens; it's not a setup, it's just a story about people doing their best in unprecedented and horrible circumstances. The simplicity of it was sort of appealing, the narrative was able to flow smoothly. Solid writing; minimal but believable dialogue, great character development--you really inhabit the characters' thought processes.

Very Apt for Our Times submitted by Lea on August 30, 2020, 6:17pm Beautifully written. This book will stay with you.

Wanted it to go on submitted by robinpollak on June 24, 2021, 11:42am It look about a third of the book for me to really get into this book. It's slow, more focused on character development than plot. Then I got really to it, because the web of connections is beautiful, and the tales of survival are fascinating. But... I really felt like the book needed another 100 pages of story, because it felt like nothing happened in the end. It was a very disappointing ending in that it just sort of trailed off, like life does, with no closure at all.

Dystopia with Michigan setting submitted by mickplu on August 3, 2021, 10:43am This is a slow-moving dystopian novel but part of that is the character development takes time. A worthwhile read but probably a little too scary to read during the pandemic!

Dystopian submitted by pamhockey25 on August 13, 2021, 4:58pm This takes place in the future here in Michigan. The story follows a caravan of actors and musicians who travel from town to town. The world as we know it is over and this book explores one possible outcome. Recommend. 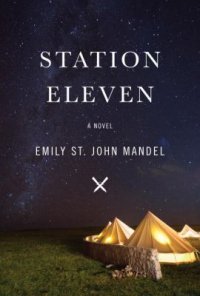