"At last, Helena Pelletier has the life she deserves. A loving husband, two beautiful daughters, a business that fills her days. Then she catches an emergency news announcement and realizes she was a fool to think she could ever leave her worst days behind her.Helena has a secret: she is the product of an abduction. Her mother was kidnapped as a teenager by her father and kept in a remote cabin in the marshlands of Michigan's Upper Peninsula. No electricity, no heat, no running water, not a single human beyond the three of them. Helena, born two years after the abduction, loved her home in naturefishing, tracking, hunting. And despite her father's odd temperament and sometimes brutal behavior, she loved him, too . . . until she learned precisely how savage a person he could be. More than twenty years later, she has buried her past so soundly that even her husband doesn't know the truth. But now her father has killed two guards, escaped from prison, and disappeared into the marshland he knows better than anyone else in the world. The police commence a manhunt, but Helena knows they don't stand a chance. Knows that only one person has the skills to find the survivalist the world calls the Marsh Kingbecause only one person was ever trained by him: his daughter."--Amazon.com.

Suspenseful! submitted by pamhockey25 on June 20, 2018, 11:23pm Helena's husband doesn't even know that her father is an imprisoned psychopath and that her mother was taken against her will and that she, Helena, is the result of rape. This is the story about her life as the Marsh King's Daughter. She's an adult now with children of her own and her father has broken out of prison killing guards and leaving false clues as to his intentions. With his escape, she thinks back on her life and upbringing. She knows her father is heading her way with the intention of taking her and her children, (his grandchildren) and disappearing again. This book is intense, and is probably better for a mature reader.

Fast paced but cheesy submitted by A2AE on July 27, 2020, 6:46am This book is great if you’re looking for fast-paced action set in Michigan’s Upper Peninsula. Bonus points if you read it while on vacation Up North.

This book is weak when it comes to the writing quality. It’s super cheesy a lot of the time and rather sloppily written at others. Great for a vacation beach read but not sure I would have read it in another setting. 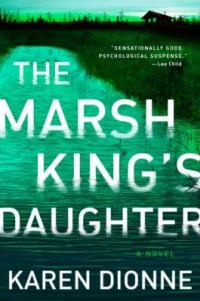