The Color of law : : a Forgotten History of how our Government Segregated America If San Francisco, then everywhere? -- Public housing, black ghettos -- Racial zoning -- "Own your own home" -- Private agreements, government enforcement -- White flight -- IRS support and compliant regulators -- Local tactics -- State-sanctioned violence -- Suppressed incomes -- Looking forward, looking back -- Considering fixes -- Epilogue.
In this groundbreaking history of the modern American metropolis, Richard Rothstein, a leading authority on housing policy, explodes the myth that America's cities came to be racially divided through de facto segregation--that is, through individual prejudices, income differences, or the actions of private institutions like banks and real estate agencies. Rather, The Color of Law incontrovertibly makes it clear that it was de jure segregation--the laws and policy decisions passed by local, state, and federal governments--that actually promoted the discriminatory patterns that continue to this day. Through extraordinary revelations and extensive research that Ta-Nehisi Coates has lauded as "brilliant" (The Atlantic), Rothstein comes to chronicle nothing less than an untold story that begins in the 1920s, showing how this process of de jure segregation began with explicit racial zoning, as millions of African Americans moved in a great historical migration from the South to the North.As Jane Jacobs established in her classic The Death and Life of Great American Cities, it was the deeply flawed urban planning of the 1950s that created many of the impoverished neighborhoods we know. Now, Rothstein expands our understanding of this history, showing how government policies led to the creation of officially segregated public housing and the demolition of previously integrated neighborhoods. While urban areas rapidly deteriorated, the great American suburbanization of the post-World War II years was spurred on by federal subsidies for builders on the condition that no homes be sold to African Americans. Finally, Rothstein shows how police and prosecutors brutally upheld these standards by supporting violent resistance to black families in white neighborhoods. The Fair Housing Act of 1968 prohibited future discrimination but did nothing to reverse residential patterns that had become deeply embedded. Yet recent outbursts of violence in cities like Baltimore, Ferguson, and Milwaukee show us precisely how the legacy of these earlier eras contributes to persistent racial unrest. "The American landscape will never look the same to readers of this important book," comments Sherrilyn A. Ifill. Indeed, Rothstein's invaluable examination demonstrates that only by relearning American urban history can we finally pave the way for the nation to remedy its unconstitutional past. -- Inside jacket flaps.

eye-opening submitted by aec on August 29, 2021, 8:26am A history of segregation in housing and it's impact on social segregation. It is a bit disorganized in that the historical basis of policies and practices are scattered throughout the book, with some focus on it in Chapter 3, but nonetheless provides one explanation for how American society got to where it is today. An eye-opening and disheartening history and an important read.

Hard, brilliant, and necessary submitted by Susan4Pax -prev. sueij- on August 5, 2022, 11:14pm This book made me so angry that I could often only read a few pages at a time.

Incredibly thorough, well organized, and utterly compelling in its research and arguments, _The Color of Law_ is brilliant in teaching us the history that is too often unknown, overlooked, or completely stifled. Because I have worked hard to learn about the history of race in the US, I was already aware of redlining, FHA mortgage denials, and violence as a means of maintaining housing segregation. Nonetheless, this book synthesized many pieces and added many, many new details and dynamics that I had not been aware of or realized were government-endorsed. I love that there is a “what to do next” section, including ideas that are far too radical to work, but truly challenge the reader to think about the question of “what would it mean to undo the harm caused by GOVERNMENT-caused segregation.”

This book is hard, brilliant, and necessary. It made me angry, and I’m so glad I read it. 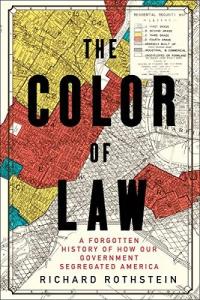