Dear Evan Hansen : : Through the Window An official compendium offers a behind-the-scenes look at the hit musical, and winner of six Tony Awards, Dear Evan Hansen, in a visual journey that includes interviews with the cast and crew, behind-the-scenes photos, a deeper look into Evan's fictional world and the show's visual world, unreleased lyrics, the libretto and much more.

Through the window indeed submitted by edb.blanchard on August 14, 2018, 7:42pm Great essays to explore the creators as well as the actors that made this production. I listen to the cast recording on repeat, but this also lets you read the scenes that add so much more to the story. 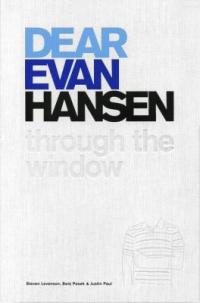