Guardians of the Galaxy

DVD - 2014 DVD Science-Fiction Guardians 6 On Shelf No requests on this item Community Rating: 4.4 out of 5 Chris Pratt, Zoe Saldana, Dave Bautista, Vin Diesel, Bradley Cooper, Lee Pace, Michael Rooker, Karen Gillan, Djimon Hounsou, John C. Reilly, Glenn Close, Benicio Del Toro.
Brash adventurer Peter Quill finds himself the object of an unrelenting bounty hunt after stealing a mysterious orb coveted by Ronan, a powerful villain with ambitions that threaten the entire universe. To evade Ronan, Quill is forced into an uneasy truce with a quartet of disparate misfits. But when Quill discovers the true power of the orb and the menace it poses to the cosmos, he must do his best to rally his ragtag rivals for a last, desperate stand-with the galaxy's fate in the balance.
DVD, region 1, widescreen; 5.1 Dolby Digital.

The Best Marvel Movie submitted by crankycrack on June 27, 2015, 8:10pm and the only one that I like to watch again and again.

Pleasantly surprised submitted by tlexcen on July 16, 2015, 3:45pm I did not expect to like this and found that my whole family loved it! Great superhero movie that was very funny too.

Great Film submitted by gina.rahl on July 14, 2016, 5:44pm Not crazy about Chris Pratt, but this was a great film regardless. The humor was spot on. Good watch.

Something Somewhat Different submitted by Meginator on July 18, 2017, 10:23am Guardians of the Galaxy is a hilarious superhero film that completely stands alone from the other Marvel Cinematic Universe films, insofar as you can jump in without prior knowledge and fully appreciate everything (which makes it a rarity these days). The themes of friendship and family resonate deeply, the characters are well-conceived and convincingly portrayed (even the CGI is good), and the the sets are fantastic. The film is acutely aware of itself but not to the point of disrupting its flow; with a wink and a nod, the story continually rolls on. This film proves that the superhero genre can accommodate a wide variety of characters, stories, and tones, and it is absolutely delightful.

Guardians of the Galaxy submitted by a2sue on August 8, 2017, 8:16am Guardians was OK, but nothing spectacular.

Funny submitted by amandaberry on August 27, 2017, 8:40am Funny, but not much of a plot. Voices were fun and characters are cute. Will probably watch the sequels.

Top 5 marvel movies submitted by tcrbondy on June 16, 2018, 6:53pm This movie is both hilarious and full of heart and deep characters. Marvel proved it can really do no wrong with this movie. Amazing characters brought to the screen and somehow heartwrenching as well

A great addition to the Marvel universe submitted by ajstemp on June 28, 2018, 1:09pm Guardians is astoundingly funny, deeply hopeful, and just an all-around great watch. It's a fun introduction to the off-Earth side of the Marvel universe, but would be worth watching if you didn't have any interest in the rest of the franchise, too.

Guardians Of The Galaxy submitted by lstorc on August 6, 2018, 2:54am Great balance achieved between introducing multiple new characters

Guardians of the Galaxy submitted by SBNB on August 16, 2018, 9:45pm This movie is very sci-fi, more than the other Marvel movies I've watched. It was good though. I enjoyed it.

Good submitted by anacoluthon on August 21, 2018, 7:30pm This movie doesn't take itself as seriously as a lot of superhero movies nowadays. Plus it has a great 80s soundtrack!

Good submitted by c_zhang on June 29, 2019, 12:40am Much to like in this movie. There wasn't really a plot, but very funny and entertaining.

Hilarious submitted by HosannaYeah7 on August 25, 2019, 7:35pm This movie is really funny I really like the hard marvel puts into these movie 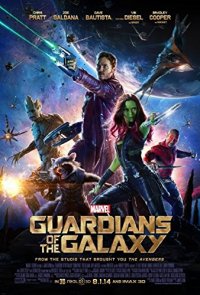