Title from sell sheet.
Originally released as a motion picture in 1995.
Special features: audio commentary; conversation between Haynes and Moore; "The suicide", a 1978 short film by Haynes; New interview with Vachon; trailer; essay by critic Dennis Lim.
Julianne Moore, Xander Berkeley, Dean Norris.
Carol White is an L.A. housewife in the late 1980s who comes down with a debilitating illness. After the doctors she sees can give her no clear diagnosis, she comes to believe that she has frighteningly extreme environmental allergies. A prescient commentary on self-help culture, as a metaphor for the AIDS crisis, as a drama about class and social estrangement, and as a horror film about what cannot be seen.
DVD, widescreen (1.85:1), mono.

Yes submitted by jibkidder on June 22, 2022, 11:04pm Great early Todd Haynes and earlier Julianne Moore. A bit of ahead of its time in subject matter, I'd say, since, at least one gets the impression from the media, that this type of malady is more common these days. 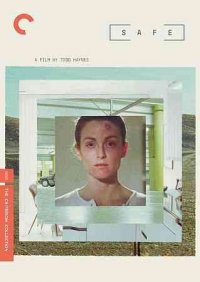