DVD - 2015 DVD FLC-JPN Silent None on shelf No requests on this item Community Rating: 4 out of 5 "With new piano scores by Neil Brand."--Container.
Minoru Takada, Hiroko Kawasaki, Nobuko Matsuzono, Tokihiko Okada, Emiko Yagumo, Mitsuko Ishimura, Joji Oka, Kinuyo Tanaka, Hideo Mitsui.
The great Japanese filmmaker Yasujiro Ozu is best known for the stately, meditative domestic dramas he made after World War II. But during his first decade at Shochiku studios, he dabbled in many genres--including the crime film, which resulted in this trio of magnificently shot and edited silents. Heavily influenced in narrative and visual style by the American movies that Ozu adored but already envincing the compassion and confident precision of his later work, these films offer revelatory early evidence of cinematic genius.
Walk cheerfully (1930, 96 min.). A seemingly no-good hood reveals his softer side when he loses his heart to a winsome secretary.
That night's wife (1930, 65 min.). Under cloak of night, a mysterious thief commits a ruthless robbery, yet the criminal turns out to be less than evil in Ozu's noir-tinged domestic tale.
Dragnet girl (1933, 100 min.). In this splendidly designed tale of redemption, a no-nonsense gangster's moll is troubled by the growing attraction between her man and a virtuous woman.
DVD. 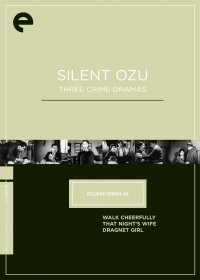 SERIES
Eclipse from the Criterion Collection