Star Trek, the Next Generation. Season 1 Special features include: "The beginning": A look at the genesis of the show and Gene Rodenberry's vision; "Selected crew analysis": first-season castmembers discuss their roles; "Making of a legend": features first-season production staff reminiscing about their favorite episodes; "Memorable missions": cast and crew discussions on key episodes and events from the first season.
Disc 1 Encounter at Farpoint, part I ; The naked now ; Code of honor -- disc 2. The last outpost ; Where no one has gone before ; Lonely among us ; Justice -- disc 3. The battle ; Hide and Q ; Haven ; The big goodbye -- disc 4. Datalore ; Angel One ; 11001001 ; Too short a season -- disc 5. When the bough breaks ; Home soil ; Coming of age ; Heart of glory -- disc 6. The arsenal of freedom ; Symbiosis ; Skin of evil ; We'll always have Paris -- disc 7. Conspiracy ; The Neutral Zone.
Patrick Stewart, Jonathan Frakes, Brent Spiner, Gates McFadden, Michael Dorn, LeVar Burton, Marina Sirtis, Wil Wheaton, Denise Crosby.
Collects the original broadcast episodes from the first season of Star trek, the next generation.
DVD, Dolby digital 5.1 surround sound.

Rocky Start submitted by EJZ on July 28, 2018, 8:18am It's a little hard to watch this first season, as some of the characters are so different than their selves fans know and love from later seasons, but it does begin to build the base for what turns out to be a funny, loving, philosophically interesting series. 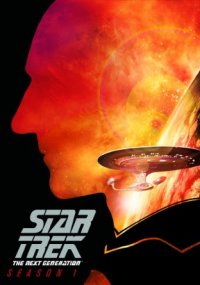