Great submitted by zmclaugh on August 2, 2018, 5:47pm A great series that ended too soon. Bad Chinese, though.

Great submitted by anacoluthon on August 17, 2018, 3:14am A scifi cult classic! There were a lot of white people for how much Chinese was spoken, though...

Keep going! submitted by valeriemates on August 22, 2019, 4:11pm The first scene in this series is a war with endless shooting. I got bored and stopped watching. But so many people love this series that, years later, I gave it another try. And I am glad that I did! The long initial scene stops and is not repeated, and an eclectic cast tells a lively "space western" story. It has some of the best strong female science fiction characters that I have ever seen. I just wish there were more episodes -- this series is very short! I love the idea of a "western" set in space, and this is very nicely done!

Should NEVER have been cancelled submitted by amandasaurus on June 19, 2022, 12:47am This is by far one of the BEST shows I’ve watched! I didn’t know it only ran for a single season and I wanted to rip my eyeballs out when I found out it was over!! The characters are so diverse and well written, the culture is well developed, just a really well rounded universe that had been so well created and executed. It’s a shame it didn’t last longer. 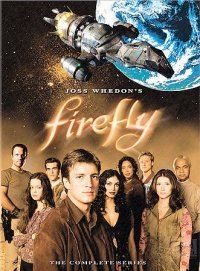