Widescreen (2.40:1).
Bonus feature: Global adventure.
Robert Downey, Jr., Chris Hemsworth, Mark Ruffalo, Scarlett Johansson, Jeremy Renner, James Spader, Samuel L. Jackson, Don Cheadle, Anthony MacKie.
When Tony Stark tries to jumpstart a dormant peacekeeping program, things go awry and Earth₂s Mightiest Heroes, including Iron Man, Captain America, Thor, The Incredible Hulk, Black Widow and Hawkeye, are put to the ultimate test as the fate of the planet hangs in the balance. As the villainous Ultron emerges, it is up to The Avengers to stop him from enacting his terrible plans, and soon uneasy alliances and unexpected action pave the way for an epic and unique global adventure.
DVD.

Enjoyable Superhero Flick submitted by kaymbre on July 19, 2016, 10:59am While not as fresh and exciting as the first Avengers outing, Age of Ultron certainly didn't disappoint. Big story. Big characters. Big battles. Warning to the purists: The filmmakers did take some liberties with the origins of one or two of the characters (limitations of real-world licensing). Still an enjoyable popcorn film with occasional moments of thought provoking storytelling.

Avengers submitted by leenajong on August 2, 2016, 10:30am Love the movie! Very entertaining.

Fun Superhero Flick submitted by Meginator on August 10, 2017, 9:59am This film proves that whoever is running the Marvel Cinematic Universe has clearly thought out how each of the characters' storylines and personalities will interact, and the result is an ensemble film that is engaging despite the multitude of storylines. Moreover, you don't need to see all of the previous Marvel movies to make sense of this one, thought it helps to have a basic familiarity with the characters (especially, in this case, Tony Stark/Iron Man). The story itself is surprisingly complex for a popcorn action film, and the stakes are suitably high, even if the film does venture a bit into the absurd. The film does feel like it has real consequences for the characters and the MCU, and overall it fits right in with what they're doing; if you're already on board, you'll probably like this one.

A fun second go around submitted by tcrbondy on June 16, 2018, 8:32pm Not as iconic as the original movie, this movie expands with more character and character interactions which is very fun. It has a lot going on in it with a lackluster villain but great heroes

Another good Marvel movie! submitted by Xris on June 26, 2018, 12:44am James Spader voicing the villain is great!! We get introduced to new characters that were hinted at in another Marvel movie. I also love that Paul Bettany's character finally gets physical form!

Age of Ultron submitted by SBNB on August 19, 2018, 9:36pm I liked it. I still prefer the first Avengers movie, but this one was good. It took me a few minutes to figure out who was voicing Ultron. It was so familiar, and then it came to me. Reddington from the Blacklist! It was a perfect pairing.

Avengers Age of Ultron submitted by Zaneeba on June 15, 2019, 12:00pm Omg this movie was so good i loved the part when thor helped create vision with his hammer and i am amazed at how vision in worthy if thor's hammer. the fight at the end was cool to XD

Good submitted by DL on June 12, 2020, 10:55pm Lots of superheroes, yes. Enjoy getting to learn more about the superheroes.

The best one submitted by odiaok on July 29, 2020, 3:45pm I enjoyed this one a lot more than the first. I liked the character interaction and the multiple storylines. It was engaging.

great addition submitted by cathydobbins on June 11, 2021, 6:01pm Loved the movie. Always a fan of Marvel. 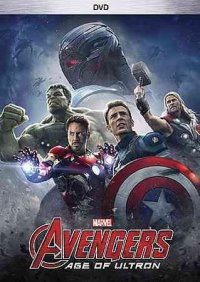