Originally broadcast on television in 2011.
CHV rating: 14A.
Special features: audio commentary on all episodes ; "Lifting up the skirt of the night" music video ; audio outtakes for "Bed & breakfast" and "Sexy dance fighting" ; Bob's Burgers original demo with introduction by Loren Bouchard ; Louise and the chalkboard.
disc 2. Torpedo.
Voices: H. Jon Benjamin, Dan Mintz, Eugene Mirman, Kristen Schaal, John Roberts.
Smart laughs and irreverent fun are always on the menu at Bob's Burgers. Bob Belcher's family-run restaurant would be a big success if not for one thing: his family! Oldest daughter Tina can't control her raging hormones. Middle son Gene promotes the restaurant by wearing a burger costume, but forgets to take it off to pee. And little Louise tells her class that Bob's burgers are made from human flesh! This quirky comedy will leave you hungry for more.
DVD, NTSC, region 1; widescreen (1.78:1); dual layer; 5.1 Dolby Digital.

New Bacon-ings submitted by Fevvers - STAR473 on July 3, 2016, 3:56am I adore this show. It took me a few episodes to really get into it and to get used to the style, but it's absolutely worth it. It does start off rough around the edges, but it gets really good really quickly. The world of Bob's Burgers embraces the misfits, teases with love, and even bursts out in hilarious songs. It's relatively family-friendly and has plenty of material for the more savvy/experienced watchers. It also convinced me that yes, farts are inherently funny - or at least can be when done by the right characters. 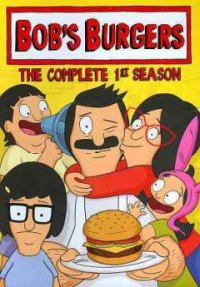