DVD - 2015 DVD Science-Fiction Martian 2 On Shelf No requests on this item Community Rating: 4.3 out of 5 Good submitted by ECReader on June 20, 2016, 12:00pm I thought this movie was good. It was worth watching though there was some area for improvement. I would recommend reading the book before watching the movie.

well done submitted by kencza on July 10, 2016, 8:55pm this was very enjoyable from the cast to the story and character development/
special effects and visuals were strong and I liked the soundtrack too

Much better than expected submitted by GJBarnett2 on July 20, 2016, 12:50am I had expected a "Space Opera." Couldn't have been more wrong! A complex story with good characters and character development, and unexpected plot twists. Highly recommended!

Very Good submitted by AprilCDB on July 27, 2016, 1:04pm Really enjoyed this movie and the problem solving to get him home from Mars

Learn to grow potatoes! submitted by gardenfaerie on June 24, 2017, 6:30pm Interesting and enjoyable story, but they really needed a gardening consultant because that is SO not how potatoes grow!!

Faithful Adaptation submitted by Meginator on July 21, 2017, 8:07pm As a huge fan of the book, I think that the film The Martian did a good job of capturing the characters, plot, and general spirit of the source material. Some of the humor necessarily becomes lost in translation, but I was pleasantly surprised by how much of the book's essence remains, especially for such a big-budget production. The film also stands alone as a gripping race against time with excellent acting, pacing, and direction. This is one of the better book-to-film adaptations I have seen.

Watch this first! submitted by Xris on July 6, 2018, 7:01pm I read the book first and then watched the movie and was sad that they took out some parts...one of the emergencies he has to deal with and a lot of the science/technical stuff to get himself where he needed to be. Otherwise, it was a great movie that followed the book pretty closely. :)

Interesting submitted by lstorc on August 28, 2018, 7:10pm This was a little unrealistic but immensely fun! Considering are space interest in Mars at this time, this movie provided a speculative glimpse one of the worst case scenarios.

Martian submitted by avrogers1 on June 20, 2019, 7:17pm This was a really good movie. I didn't expect to like it, but it turns out that I really did. Its super suspenceful. I grabbed and kept my attention.

The Martian submitted by c_zhang on June 29, 2019, 1:06pm I liked the book better, but the movie had good acting and was interesting.

So Good, Until the End submitted by jgerman79 on July 24, 2019, 7:44pm I loved all the attention to detail: the attempts to get the science right; the politics vs right from wrong; showing the declining psychology; and showing the human spirit at all the right moments. But that ending... just threw it all out the window. Oh well. Still worth the watch!

Loved this movie submitted by crp on August 5, 2019, 9:38pm Eased my anxiety about my medical treatments

SO AWESOME! submitted by SYB1001 on June 26, 2020, 3:39pm I really loved the story line of this movie!! My family watched it very recently, and we LOVED it!! It leaves you with so much to think about, and the cast, script, and soundtrack was amazing!

Good Fun with Ripples of Tension Throughout submitted by sVfGI7Glt2pz7GZgVB90 on August 15, 2020, 10:57pm The Martian is about an astronaut played by Matt Damon, who's traversing Mars's surface with the crew and is abruptly left behind. He wakes up in this barren landscape that no one will be able to get him for four years, and he has to figure out how he's going to sustain just on his own. As a botanist, he has to figure out how to grow things and how to make rain.

Matt Damon is so likable, and he has this real can-do attitude in the movie. He really holds it all together. Overall, nerve-wracking at times but fun as well.

The Martian submitted by SBNB on June 16, 2021, 2:23pm This is an excellent movie. A little bit Castaway, a little bit Lost In Space.

This reView will be buried among the dozens of others. Overall, far better than your average awful scifi flick, but far from submitted by Tassos on March 20, 2022, 4:27pm perfect.

Matt Damon is great for this role. Jeff Daniels is OK for his. THe rest of the riffraff posing as NAS scientists or astronauts are far from convincing, they look too much like glamorous pea-brained actresses or PC chosen minorities-quotas.

The musical score does not help, too loud, intrusive and pompous.

The joke with the god damned disco music is ok at first, but when we are repeatedly subjected to this crap again and again, it's not funny, only annoying.,

One would expect 'scientist-astronauts to have far better taste in music than that. IDeally, CLASSIC during the day and jazz to relax at night.

And what is the deal with the RIDICULOUS spiral paper pad where Matt does his calcs? Are you for real??? DO you morons in Hollywood know how much $ it costs to send one p ound of junk to MARS??? Why IN HELL wouldn't he take these notes on his laptop/iphone/tablet instead????? 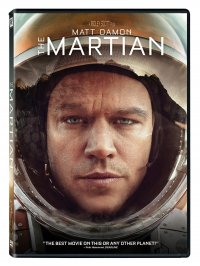