Night of the Creeps

Blu-Ray - 2009 Blu-ray Horror Night None on shelf No requests on this item Community Rating: 3.4 out of 5 Originally produced as a motion picture in 1986.
Special features: commentary with writer/director Fred Dekker; cast commentary; original theatrical ending; deleted scenes; Thrill me: making Night of the creeps: Birth of the creeps, Cast of the creeps, Creating the creeps, Escape of the creeps, Legend of the creeps; Tom Atkins: man of action; Trivia track; original theatrical trailer.
Jason Lively, Steve Marshall, Jill Whitlow, Tom Atkins.
While attempting to perform a hazing prank during pledge week, J. C. and Chris, a couple of geeks, accidentally thaw a corpse that is infected with a deadly parasite. The entire campus starts to become infected as the parasites enter through their victims mouths and turn them into vampires. Now, along with a foul-mouthed and sarcastic detective, Chris attempts to save the campus, then the world.
Blu-ray disc, 1080p high definition, 1.85:1 (widescreen) aspect ratio, English 5.1 DTS-HD MA.
This Blu-ray disc will not play in standard DVD players.

So great submitted by manz on December 7, 2021, 2:42pm I don't know what jaegerla's talking about. I loved this movie! It's so cringy and weird. Plus, TOM ATKINS. Come on. 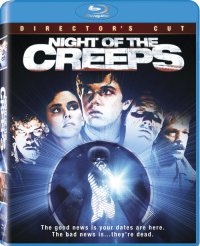