My favorite show submitted by lfmarcus on August 19, 2017, 4:00pm I just adore this series and I've seen it several times. It's written by women, stars a vibrant and interesting woman over 40, passes the Bechdel Test with flying colors, and you just can't beat the smoldering chemistry that Phryne and Jack share throughout the show.

Delightful Aussie Detective submitted by Meginator on July 11, 2018, 10:45pm This series is so refreshing! Phryne Fisher is the Roaring 20s Aussie detective heroine I didn't know I needed, and her adventures are sharply written, empowering narratives that challenge the status quo of Phryne's time and our own. The supporting characters are excellently drawn and convincingly portrayed, immersing viewers into the setting and often providing much-needed comic relief among some surprisingly dark plot twists. This is a character-driven series with real depth, and it's easy to love from its first moments.

Absolutely Delightful submitted by wellscai on August 5, 2018, 1:13pm I absolutely love this show! Miss Fisher is strong, funny, and sexy, and the mysteries are super interesting. I actually like the show better than the books; I think Essie Davis's Phryne is more fun than the book version!

Wonderful! submitted by majean on August 17, 2018, 1:04pm Every character is likable. Really hooked on this one!

Quality submitted by kjverbrugghe on June 22, 2019, 9:34pm Entertaining, Well written and acted. Interesting characters and storylines. Good chemistry between characters that develop over the 3 seasons.

Delightful! submitted by RowanEMH on August 31, 2019, 5:43pm Fun series that's easy to binge watch. Sort of like Murder She Wrote, set in the 20s but with a wink. 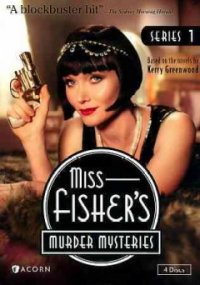