DVD release of the 2015 motion picture.
Bonus feature: A case of the Cold War: Bridge of spies (featurette).
Tom Hanks, Mark Rylance, Amy Ryan, Alan Alda, Austin Stowell.
James Donovan is a Brooklyn lawyer who finds himself thrust into the center of the Cold War when the CIA sends him on the near-impossible task to negotiate the release of a captured American U-2 pilot.
DVD ; widescreen (2.40:1) presentation ; Dolby digital 5.1 surround (English, French and Spanish) and 2.0 stereo. surround (English DVS).

Good movie submitted by RebeccaWittekindt on August 29, 2020, 10:49am Enjoyed the movie, though not one of my favorites of Spielberg. Rylance was excellent.

Great cast submitted by saleder on August 23, 2021, 5:53pm This movie has a great cast including Tom Hanks, Mark Rylance and Sebastian Koch, each superstars in their own right. This is a gripping story and Spielberg tells it well. Very enjoyable. 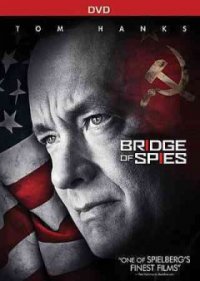