Great movie! submitted by bookher on July 13, 2016, 1:03pm I really appreciate this movie taking a very confusing subject/topic and making it understandable and relatable. Acting was excellent too!

Scary Reality submitted by moola on July 14, 2016, 2:43pm So depressing that this actually happened.Hard to watch and relive it.

The Big Short submitted by SBNB on August 13, 2016, 7:12pm This is an excellent look into the causes of the economic crash of 2008. The story was engaging and the banking terminology was explained as the movie moved along. It's a great movie. I only wish the "just kidding" ending were the true ending. It's horrible how corrupt the system is in this country.

Recent Past submitted by Meginator on August 2, 2017, 3:16pm This film is difficult to watch, if only because of its gotcha tagline at the end- the reprehensible people responsible for the subprime loan crisis, as depicted here, haven't atoned for their crimes and essentially got away with it. Knowing that, the film is still an interesting and surprisingly comprehensible examination of what, exactly, all of this means and how the situation arose and, eventually, melted down, taking our economy with it. The script has a surprising amount of humor and the acting is excellent. The financial shenanigans can be a bit difficult to follow at times, but that's the nature of the beast; this is a good film if you can stomach the inevitable consequences.

Necessary movie submitted by ferielp on August 25, 2017, 4:42pm I couldn't explain the intricacies of the crisis if I tried, but the movie did a good job of making the exposition keep up with the pace of the plot but also be detailed enough that if I were to go off of the information the characters discussed, I could delve deeper into the facets of the collapse on my own time. You did not need to know economics to enjoy the movie, but it definitely would have helped.

Hard to believe the movie was good submitted by EJZ on July 23, 2018, 8:25pm When I heard they were making a film of the book (which I loved) I couldn't imagine how you could possibly dramatize it. As good as Michael Lewis is, the subject can still be very dry. I needn't have worried- the film is fantastic.

Christian Bale has never been better. Steve Carell is fantastic as always.


Not for me submitted by jibkidder on July 3, 2022, 10:30am There is a site called doesthedogdie.com which is a crowdsourcing site for identifying triggers in movies, ostensibly so viewers can avoid them. One of the listed triggers is "is the fourth wall broken", which at first seems like an odd thing to note, but then I remember how much I dislike the pedantic tone of this movie - or perhaps the word I'm looking for is didactic - and consider the possibility that I have been triggered! 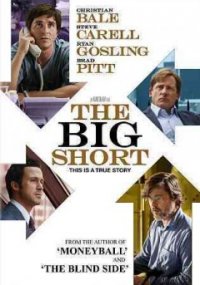