Title from container.
DVD release of the 2015 motion picture.
Widescreen.
Special features: Uncovering the truth: A spotlight team roundtable ; Spotlight: a look inside ; The state of journalism.
Mark Ruffalo, Michael Keaton, Rachel McAdams, Liev Schreiber, Billy Crudup, Stanley Tucci, John Slattery.
The riveting true story of the Pulitzer Prize-winning Boston Globe investigation that would rock the city and cause a crisis in one of the world's oldest and most trusted institutions. When the newspaper's tenacious 'Spotlight' team of reporters delve into allegations of abuse in the Catholic Church, their year-long investigation uncovers a decades-long cover-up at the highest levels of Boston's religious, legal, and government establishment.
DVD ; anamorphic widescreen (1.85:1) presentation; Dolby digital 5.1.

great movie submitted by kbahleda on July 23, 2018, 10:24am Sad topic and a good story to tell that everyone should know about

solid true-story newspaper-hero drama submitted by lisa on August 21, 2018, 10:41pm you gotta be okay with the priest crap, tho

Very Good movie. submitted by Tassos on December 27, 2018, 9:26am Great Script. As far as the cast, I wish they would use more realistic choices. Don't use Keaton and Ruffalo and that glamorous actress to represent the GLobe staff, use actors and makeup that LOOK LIKE THE ACTUAL ONES FOR A CHANGE!

ALSo in the supplements, it was RIDICULOUS to have the ACTORS, instead of the ACTUAL HEROES., keep pretending they are the characters they played, even though the ACTUAL HEROES were available!


Great reporting submitted by Xris on January 2, 2020, 7:59pm Hats off to these reporters that uncovered this story and showed it to the world! Hopefully the abuse will stop now.

Excellent Film submitted by caburr47 on July 2, 2020, 9:54pm This is such an excellent film, it is well written, phenomenally acted and is a difficult subject matter that was handled with absolute reverence for the individuals for whose lives were showcased.

Watch the special features - they interview the actual Boston Globe Spotlight team, and it is evident that the cast did their homework in terms of portraying these individuals and they were pitch perfect.


sad, true, powerful submitted by crp on July 28, 2020, 1:33pm This is excellent to watch and is sad, true, and powerful. I highly recommend it. I think that the subject area is a bit mature for a younger audience, so recommend watching without kids first (even teens).

Riveting submitted by mandevil on May 1, 2021, 9:12am Terrific cast and a story that still claims our attention.

OK submitted by jibkidder on July 6, 2022, 9:36am Sturdy, watchable movie about the Catholic scandal, but I'd recommend in it's place that absolutely crazy doc with the lunatic violator priest they keep moving around.. "Deliver Us From Evil", tearjerker of a nonfiction horror film. 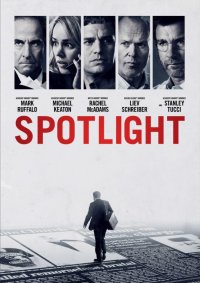 LANGUAGE OPTIONS
In English, with optional subtitles in French or Spanish; English subtitles for the deaf and hard of hearing.