Originally released as a motion picture in 1952.
Based on the story: The tin star / John W. Cunningham.
Special features: The making of High Noon - narrated by Leonard Maltin; includes interviews with Lloyd Bridges, Stanley Kramer, Fred Zinnemann, John Ritter, David Crosby and Gary Cooper; theatrical trailer.
Gary Cooper, Grace Kelly, Thomas Mitchell, Lloyd Bridges, Katy Jurado, Otto Kruger, Lon Chaney, Henry Morgan.
Just-married lawman Will Kane is about to retire as a small-town sheriff and begin a new life with his bride when he learns that gunslinger Frank Miller is due to arrive at high noon to settle an old score. Kane seeks assistance from deputies and townsfolk but soon realizes he'll have to stand alone in his showdown with Miller and his henchmen.
DVD; region 1; widescreen presentation.
Contents: Tin star.

Negative portrayal submitted by Jen Chapin-Smith on August 27, 2012, 12:47pm Although this is a classic movie starring Grace Kelly (who later became Princess of Monaco), it is a very negative portrayal of a Quaker who gives up her pacifist beliefs when confronted with actual violence. The portrayal implies that pacifists lack moral conviction and that pacifism is not a realistic conflict-resolution strategy.

Classic Film submitted by Meginator on June 30, 2017, 8:39am "High Noon" is a classic film that cometely deserves its reputation. The story, about a man determined to do what is right, even if his allies opt for the easy way out, is a chilling reminder of the horrors of McCarthyism and, perhaps, a warning that is more relevant than ever in today's political climate.

I love the subtlety of Carl Foreman's script, which allows the story to develop without heavy-handed authorial intervention. It is a masterpiece of suspense, aided by inspired acting from Gary Cooper and the supporting cast; the minutes leading up to the climax are a masterclass in suspension and require only music and a series of almost still shots to ratchet up the tension.

Everything about this movie is good, and while one character acts unexpectedly at the end, the moral calculus involved isn't cheapened by hand-waving explanations. She makes her choices and the film ends, leaving us to ponder them. I believe this is realistic and respectful, and it fits the tone of the film perfectly. The film condemns violence and poses serious questions about its utility and desirability; no one escapes morally unscathed. The climactic gunfight is exciting and staged well, but the melancholy ending, again without the weight of dialog, undercuts any feeling of moral victory.

"High Noon" is a teriffic film that stands the test of time and fully deserves its place among the pantheon of great cinema.


It may be a classic... submitted by gardenfaerie on August 30, 2017, 6:24pm But I didn't really enjoy it. I found it over acted and the huge age gap between Kelly and Cooper seemed a bit creepy. Worth seeing, if you're interested in seeing classics for their own sake.

Not as good as other classic westerns. submitted by Tassos on September 20, 2019, 10:02am Gary Cooper looked really old and tired in this movie, (esp his face), while he was only 50. Grace Kelly, his supposed bride, was only 23, which made him look even older. COoper had back problems even at that young age, and had a hard time doing the fight scenes.

I could not view this DVd, the god-awful fanfare music for one thing, and most of the movie going on and NOTHING happen. 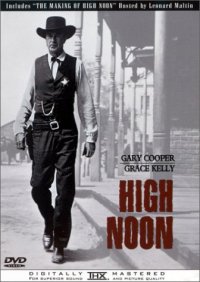 LANGUAGE OPTIONS
In English with some Spanish dialogue.