Great casting submitted by ccrose on August 31, 2019, 5:32pm These two were physical opposites which helped define the frailty that crept up on Hoffman’s character.
I’d never seen a movie that had this dynamic, of a situation in which both are desperate but Voight’s character has a capacity for love and caring. Both had figured out early on they were going to be living by their wits, that life was passing them by., a great mix of comedy and pathos.
Lots of NYC street shots to enjoy. 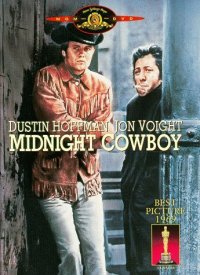