DVD DVD TV Pride 2 On Shelf No requests on this item Community Rating: 4.7 out of 5 Excellent Adaptation submitted by Sara W on July 11, 2011, 9:34pm This is my ideal adaptation of Jane Austen's excellent novel "Pride and Prejudice." Each of the actors is an excellent embodiment of their character, and highlights their characters' predominant traits beautifully. Mrs. Bennett is as hysterical and scheming as could be, Jane as steady as a plow horse, Lydia as flighty and trampy as possible in her time period, Lady Catherine de Burgh overbearing, Mr. Collins obsequious, Bingley as good-natured, Darcy as remote and abrupt and darling Elizabeth as witty and sharp as Austen made her.

The settings are lovely and every performer talented and well-used. I can watch this version of the book again and again and enjoy the details anew each time. For instance, when Mr. Collins and Lydia run into each other in the stairwell, she in a state of undress. It cracks me up every time, and I've seen it at least 15 times.


Highly Recommended submitted by ashflowtuff on August 18, 2011, 8:30am I agree with other reviewers that this is the best adaptation of the book. I enjoyed the newer feature film, but still liked this better.

Excellent version submitted by pk on July 10, 2012, 3:31pm This version of Pride and Prejudice is one of the absolute best. I like it better than the 2005 film version, and that's a decent version. At first Colin Firth doesn't look like the Mr. Darcy as described in the book, but give it time. His acting takes over and he absolutely shines as Darcy. The other actors do well also. Elizabeth is excellent, Mr. and Mrs. Bennett could not be much better. Jane should be prettier and Charlotte not as pretty, but both act their parts very well. Lydia seems even more wild than than my reading of the book, but that's fine.

It is faithful to the book and sure to delight anyone who loves P&P. If you haven't read it yet, by all means, be introduced to Jane Austen's comedy of class and manners in Regency England through this adaptation.


Best version submitted by smgop on August 21, 2012, 9:56am This is the quintessential movie version of the book. Excellent!

Love it submitted by DL on August 28, 2012, 7:40am This is may favorite version of this movie and I own several versions. At least twice a year I need to watch this. BBC just does Jane Austen the best. The charaters are perfect, the costumes , the sets are just great.

Great movie submitted by Cami K on July 26, 2013, 6:45pm Great acting in this version of Pride and Prejudice. Gotta love Colin Firth. Crispin Bonham Carter really nails the character of Bingley. He is just as I imagined him in the book.

the best submitted by airgood on August 6, 2014, 11:51am No need to watch any other adaptations- this one is the best! It's humorous and fits the book well.

the best submitted by emaelshaikh on August 31, 2016, 12:24pm This is the BEST adaptation--far better than the more recent one with Knightley.

This is truly the best adaptation of Pride and Prejudice. submitted by JoCeAn on July 16, 2018, 10:55pm Forget about the Keira Knightly film, this is what you should be watching.

Great adaptation submitted by RowanEMH on July 28, 2018, 9:24am Nothing, of course, beats reading Jane Austen’s witty commentary on early 19th c English life, bit this is, by far, the best movie adaptation of her work and this book specifically. I’ve rewatched it many times. Colin Firth is delightful, but the cast as a whole is wonderful, especially Jennifer Ehle as Lizzy.

Strong Adaptation submitted by granumm on August 4, 2018, 1:23pm This version best follows the plot of any adaptation available. Mr. Collins makes you cringe accordingly, Mrs. Bennet is a bit over-the-top (even for Mrs. Bennet), but Jennifer Ehle radiates the spirit of Elizabeth Bennet and Colin Firth portrays all the reticence and quiet determination of Mr. Darcy.

Pretty Good submitted by majean on August 8, 2018, 8:20pm It's a good adaptation, but not my favorite Darcy. (Darcy also isn't my favorite Austen hero.)

Pride and Prejudice 1995 submitted by lstorc on July 18, 2019, 3:24pm This is pretty true to the book, but there is some connection lost audience and the characters.

a classic submitted by yufamily on August 24, 2019, 1:21pm Just wonderful to watch and enjoy

Love this submitted by qbqrat on June 15, 2020, 9:35pm It may be five hours long, but it is well worth it. Excellent performances all around and beautiful scenery.

Excellent submitted by Angela Argento on August 20, 2020, 4:19pm By far the best version! Enjoyed by everyone in our family - we rewatch at least once or twice a year! Never gets old.

WATCH THIS ONE submitted by amandasaurus on June 15, 2022, 10:43pm the BEST film version out there, of course! Colin firth is absolutely iconic. For those of us who always lament films cutting bits out to make the time cut, this is the film for you because it includes just about everything!

favorite adaption submitted by bjkoch on July 8, 2022, 12:42pm scores better than the newer one.

solid adaptation, with good art direction submitted by lisa on July 27, 2022, 2:49pm or i guess they call it production design now 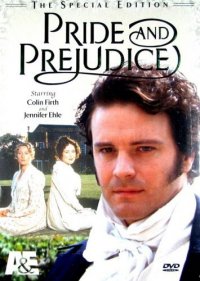