The Good, the bad and the Ugly Originally issued as a motion picture in 1966.
Includes theatrical trailer.
Includes 14 min. of restored footage that was cut for the original theatrical release in the United States.
Clint Eastwood, Eli Wallach, Lee Van Cleef, Aldo Giuffre.
During the American Civil War, three men seek hidden loot. With greed as their sole motivation, they overcome anything that gets in their way--including each other. Very violent and drawn out western.
DVD ; Dolby, widescreen.

if you love to see Clint squint and chew a cheroot submitted by hathaway1066 on July 31, 2013, 3:28pm This is one of those 'guy films'. Clint does more by not talking and making bad guys sweat--then taking them out with swift, sure shooting than most stars do with pages of dialogue and/or arsenals of multiple weapons, explosions, etc. 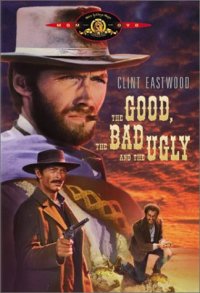