Charming submitted by Daniel Saltzman on January 4, 2010, 12:19pm A cute growing-of-age film about a young witch trying to find her place in the outside world, while trying to make new friends on the way.

Kiki submitted by pandangel12 on June 22, 2011, 10:08am Kiki is a witch in training, and she starts a delivery service in a town. She befriends customers and makes lots of new friends along with her cat, Jiji. A funny tale.

Fun submitted by xoxobrenda on June 29, 2011, 12:47pm Kiki is such a fun, growing young witch. Her journey to an distant seaside town, meeting new people, and regaining inspiration is a great story to watch.

Great submitted by johnsoem on August 15, 2011, 8:47pm The story of Kiki is not so much that she's a witch, but that she's sent out into the world on her own to figure out who she is and what she wants from life. It's a fascinating and fun background, filled with beautiful scenery.

My Favorite Miyazaki submitted by Jan Wolter on July 8, 2013, 8:50am This is not only a terrific film, it's just about the best movie imaginable to share with kids. Kiki is a witch, though her magical powers seem to be limited to being able to fly on a broomstick. She sets out alone to try to find a place for herself in a world where witches are rare, but not feared. Though she has plenty of spunk, she is often overwhelmed by shyness. The movie has no violence, and no villains. Repeatedly, things that seem frightening (the baker's husband, a big dog, some birds) turn out not to be so frightening when you get to know and understand them. Though Kiki is obviously wonderful, she struggles with self confidence, and her romance with a flight-obsessed boy is continually undermined by her self doubt. The story of how she finds her mojo is is inspiring, and funny and charming.

Great, early Miyazaki film submitted by dimuziom on July 21, 2013, 4:24pm Miyazaki has earned a lot of attention for his more recent works, but his earlier stuff is also excellent! This is a wonderful story about coming of age and growing up, with humor and melancholy alike. This has always been one of my very favorite anime, and is especially appropriate for younger audiences, or those not interested in violence etc. as it is entirely family-friendly.

Wonderful Japanese Film submitted by xiwang on July 27, 2013, 6:06pm There is something about Japanese films that completely sets it apart from Western ones. The unique, wonderful, awe inspiring artwork and the calm and peaceful story lines. This is a must see for any Japanese film lovers!

Gigi submitted by waffoo2 on August 6, 2013, 9:03pm This movie is inspirational to everyone. Recommended for people of all ages everywhere!
I adore her cat!

Son's Favorite submitted by godzilla on August 11, 2013, 9:07am This was my sons first favorite movie. He could watch it over and over. I like that Kiki is a strong and independent girl. Very cute story and the voice dubbing is excellent. We usually prefer subtitles.

Old Favorite submitted by SolaireFQ on July 31, 2016, 3:21pm This is a delightful film about friendship and growing up.

Obsessed submitted by KJRULEZ on July 31, 2016, 6:54pm I was absolutely obsessed with this movie as a child. There was a period in my life where I watched this dozen of times. It's a great film--it's got magic, wonder, and a relatable coming of age story. Like all other Studio Ghilbi films, both kids and adults will love it.

Sweet & Beautiful Animation submitted by Beth Manuel on August 1, 2017, 4:45pm Finally watched this film after hearing so many families and kids rave about it. It's a nice tale. Kinda weird, though.

sweet! submitted by kbahleda on July 3, 2018, 6:34pm This is one amazing film. It is fun and adorable and one you can watch again and again.

childhood favourite <3 submitted by WiseRaven on August 15, 2018, 1:37pm this movie is amazing in all respects. the animation, voice acting, music, storyline. this used to be my all time fav and is still in my top five. jiji is cute and snarky and kikis adventures are interesting and enjoyable. watching her become the young independent witch she is is an incredible experience and will make you want to rewatch it time and time again.

Wonderful submitted by majean on August 17, 2018, 1:35pm I love this movie and recently shared it with my niece. She loves it now, too!

Favorite submitted by Lynne Aldrich on July 5, 2020, 1:14pm This is a favorite movie of mine for a very long time and still is.

good movie submitted by Fleabag on August 24, 2020, 5:38pm although this isn't my favorite ghibli movie, it's still a wonderful one. it's definitely more appealing to younger audiences. jiji's my favorite. 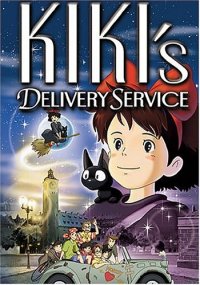