A perfect children's film submitted by Daniel Saltzman on January 4, 2010, 12:11pm A charming, warm growing-up film. Like Miyazaki's other films, not only is the story wonderful, but the inclusion of all the little details makes it even more realistic even in such a fantastical world as the Spirit Realm. A must-see family film.

Essence of Japanese myth submitted by minako on July 3, 2010, 8:40am This is not merely a successful fantasy film, but it also gives you the idea of Japanese ancient myths, in which many kinds of deities, especially in Mother Nature, are depicted sometimes as fearful and sometimes comical entities. It's really interesting to see all those unique characters that Miyazaki created and visualized with the essence of such myths. Of course, ignoring all those myths, this film is all the same lovable. I'm sure everybody can enjoy it.

Great! submitted by xoxobrenda on June 28, 2011, 10:48am This film was really creepy when I first watched it. The spirits, throwing up, and parents transforming into pigs all together just creeped me out...but upon the second time watching it, I saw it so differently. Because it's about courage, confronting, family. The bonds we make with the people we meet, how to reach a goal, helping others. There's a special mystique that you feel. I have loved this movie ever since, so watch it at least twice! :)

A favorite! submitted by kittenkat101 on August 23, 2011, 11:52am Spritied Away has been one of my favorite Miyazaki films since childhood. It is relevant for a person of any age however, because the story is strong and the movie does not solely focus on animation (although that is good too!)

Miyazaki at his best! submitted by chuntoon on June 24, 2012, 10:46pm This film manages to be terrifying, heartwarming, funny, strange, beautiful, and profound within the same breath. It is truly a work of art.

It should be noted that Disney did an exceptional job dubbing this film. GREAT voice acting.


Amazing submitted by gxl on July 14, 2012, 8:56pm Wow! This movie is so good. The plot, animation, everything about this movie is good. It tells a story about a girl in a magical world working for a bathhouse. As the story progresses Chihiro grows stronger. I have seen this movie so many times and I still haven't gotten bored of it! Strongly rocommend it!!!!! ^3^

Amazing! submitted by Bookbird on June 20, 2013, 10:15am Miyazaki is, as usual, a genius. Sure, there were some slightly creepy parts such as a spirit throwing up, and blood. But it's a wonderful movie! Everyone should see it!

Magical and Magnificent for All Ages submitted by Josie Brown on June 28, 2013, 2:12pm I saw this movie for the first time when I was five years old. I admit I was scared at that age, but I still loved it! I thought the whole movie was very creative.
Miyazaki at his BEST!

Phenomenal! submitted by ValerieL on July 9, 2013, 3:51pm This is one of my favorites of Miyazaki's films. All of his films are brilliant, but this one, "Castle in the Sky", and "Howl's Moving Castle" are my favorites. The cinematography that Miyazaki manages to create through his animation is just phenomenal and amazing. I'm always spellbound when I watch a new movie for the first time (or first few dozen times!). These are movies I like to own so I can watch them again and again and share them with friends and family.

In this particular story, we watch Chihiro learn to gather her courage, stop whining, and do the things that must be done to save her family from the Spirit Realm. It's a wonderful story about courage, responsibility, doing things without whining/complaining and learning how to grow up to take care of yourself and those around you. The characters that are a part of the Spirit Realm are imaginative, fascinating, and yet completely believable (if you believe in a Spirit Realm). While the imagery and storyline may be slightly frightening to younger children, I highly recommend this for any family with children around ages 7 and up.

Family favorite submitted by godzilla on August 11, 2013, 9:03am Magical and quite odd. Takes you on an adventure you could have never imagined.

Really Good submitted by iamnotonfire on January 21, 2014, 7:55am Awesome movie. I thought it was great. Just a notice but the pigs and monsters are really sick.

Minority of one submitted by mjanen on July 20, 2014, 4:09pm I seem to be the only who was not fond of this movie. I like the animation, but the story just seemed tedious and overly gross. Also I didn't see much point to it all. Not sure what Shihero, the main character, got out of the whole ordeal, and it was an ordeal for me to watch her ordeal.

cool cause its Miyazaki submitted by Kikumatsu97 on August 13, 2014, 8:14pm It's dynamite because it's illustrated not just animated.it's actually drawn.Vibrant colors, interesting characters.

terrible submitted by catgirl12 on June 20, 2015, 10:04am there is nothing I like about this movie. I have lost sleep over the creepiness of this garbage. if you have younger children, don't watch this movie. young children will be crying and scared. I am over 10 years old, and creeped out by this movie. I agree with the review, "Minority of One."

So good submitted by Gina Hewitt on July 14, 2016, 5:20pm If it's Miyazaki you know it's good. This one wasn't as compelling for me plot-wise, though I can't help but enjoy the animation. So wonderful.

Beautiful submitted by KJRULEZ on July 25, 2016, 10:27pm The story, the animation, the characters are all absolutely superb. Everyone will enjoy this movie (unless you are easily disturbed). An engaging story for all ages. Check out other Studio Ghilbi films if you like this one!

Flim submitted by FubukiShirou on August 24, 2016, 12:44pm I love it. Me and My sister couldn't stop watching it.I recommend to Anime lovers

Fantasy for Family Viewing submitted by ekjensen on July 19, 2017, 2:56pm Watch this special animated film with its fantasy in the genre of the Wizard of Oz and/or Alice Through the Looking Glass. Visually colorful with interesting underlying (and obvious) themes related to the environment, relationships, and human behavior (e.g., greed). Must see.

one of the best Ghibli movies submitted by kbahleda on July 3, 2018, 6:22pm This was one of the most magical movies with great animation.

fantastic submitted by srahman on July 22, 2018, 3:20pm I watched it for the second time and it was even more beautiful and amazing than the first time I watched it. I could never get tired of this movie.


fantastic submitted by WiseRaven on August 15, 2018, 1:57pm when i was little i watched this with my parents and for some reason found it terrifying, maybe because *spoiler alert* the parents were turned into pigs or something like that, but upon rewatching in my teen years i absolutely love it. so many twists and turns. a girl completely thrust into a whole new world with spiderpeople, dragons, and much much more! highly recommend, but don't suggest showing to little kids.

Fantastic submitted by majean on August 17, 2018, 1:36pm There are many references to Japanese culture and myth, but they don't confuse non-Japanese viewers.

Amazing submitted by Smileyfrowns on August 20, 2018, 4:05pm I can't say enough great things about this movie. The illustrations are fantastic, and the food makes you so hungry! The storyline is unique, and features a main character who is strong and able to face many obstacles. Although it may be a little scary for younger viewers, I think those of all ages will enjoy this movie.

Thoughtful fantasy submitted by lstorc on August 27, 2018, 3:34pm This is a good family friendly movie, but might be a little dark for young children (younger than seven). It has an interesting premise and execution.

A Solid Ghibli Film submitted by dntanzer on August 31, 2018, 9:50am This is probably the Studio Ghibli film people talk about most. It's set in a spirit world that's interesting and engaging for the audience. It's definitely dark. As a child, I felt a bit disturbed watching some of the scenes (such as No-Face eating other creatures, the parents turning into pigs). It can be hard for me to rewatch it now because of this, but I think if you watched this only as an older teen/adult, you'd enjoy it a lot!

Amazing submitted by c_zhang on June 29, 2019, 12:49pm The premise is very unique, and the execution was amazing. The art was gorgeous, and the film was charming and interesting. One of my favorite Ghibli films.

Thoughtful submitted by ekrieger on July 4, 2019, 2:27pm I first saw this movie when I was 13 and it came out in theaters. The newspaper (yes, newspaper lol) described it as "A girl and her family move to a new place and go on a strange adventure." That was the understatement of the year! After the movie I told my mom I thought it was "good but weird," which I still think is a pretty fair summary haha. I still love this movie. The bath house and the spirits are very unique, as are the motivations of various characters. You definitely root for Chihiro, but the line between 'good guy' and 'bad guy' is kind of muddled for some other characters, reflecting the complexities of real life. The animation, of course, is beautiful, and there are interesting messages about family, being a hero, and what it means to grow up.

Just Perfect submitted by Princess Cimorene on August 9, 2020, 4:27pm This was the first Japanese/Miyazaki movie I ever saw and it absolutely blew my mind as a kid. The visuals, colors, music, plot--everything is so perfectly constructed. I think it might actually be the most perfect story I've ever fallen into.

Miyazaki Anime is Great! submitted by KazueKawakami on August 11, 2020, 11:31am I love this story.
But sometimes scared imege in my kids.

Excellent submitted by maddymcpherson on July 11, 2021, 8:11pm The animation is excellent. It has a nice plot and wonderfully made.

yess submitted by Fleabag on July 31, 2021, 7:38pm spirited away is honestly probably one of ghibl's best films-
it's creepy, but so beautiful and stunning at the same time. i wouldn't reccomend letting super young kids watch it, since it does get pretty creepy sometimes. (i mean i still get super creeped out, and i've watched this movie tons of many times.)it's super visually pleasing, as all miyazaki films are.
highly reccomend! 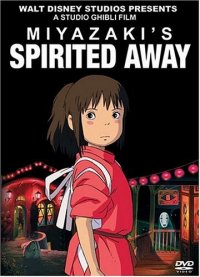