Favorite Musical submitted by lovetoread23 on July 15, 2011, 5:33pm My favorite musical of all time. The story is so moving and the music and dancing is incredible. If you love Broadway you HAVE to watch this!

Puerto Rican, only a bit submitted by willow on August 31, 2015, 1:27pm West Side Story is seen as an urban Romeo and Juliet, with the rival "families" being the Puerto Rican Sharks and the white Jets. Russian-American actor Natalie Wood plays the Puerto Rican Maria, but Puerto Rican Rita Moreno won an Academy Award for her portrayal of Anita.

[Edit Jan 2017: As Rita Moreno discusses with Maria Hinojosa in episode 44 of "In the Thick" everyone, including her, was heavily made up to be quite dark. See http://www.inthethick.org/episodes/ .]


awesome movie submitted by maforbes on July 8, 2016, 6:01pm it is such a cool movie and is so moving...LITERALLY and the dancing is so professional with rival gangs trying to claim land. if you love cool movies, watch this!!!!!!!!

Great Music submitted by allie0 on July 9, 2018, 7:42am This is one of the best musicals out there. Bernstein's music is remarkable.

Revolutionary musical submitted by FordAlpha on August 25, 2019, 9:30pm Though the film version is dated in some ways, it brilliantly showcases Bernstein's revolutionary, masterpiece musical. The choreography is amazing. There's some cool bonus material in this 2-disc set.

Staging was always sharp submitted by ccrose on August 31, 2019, 3:41pm Watched with freshmen writing students. Some had never seen a musical. So there’s that. But it took about two minutes for a student to point out how seating was divided by race. And we were off and running. West Side Story struggled to get written and really came together on the heels of Brown vs Board of Education. Then with that piece, students could understand better what a struggle of our nation it was.

Fantastic musical submitted by rebecca.perreault on June 29, 2020, 11:14am This film has received countless accolades for good reason. The Romeo and Juliet story is timeless, and the modern spin on the tale reigns true still. Watching this film over I couldn't believe it was from the 60s - the racism and resistance to authority of the Sharks and Jets is similar to our current street politics. Beautiful costuming and dancing.

Preferred Edition submitted by kimberlina on June 17, 2022, 12:00pm After watching the updated version (2021) of this Musical, I prefer this edition. I like the feel, setting and characters. It all feels more authentic somehow. Worth watching

Good songs submitted by Abbie D. on July 25, 2022, 4:28pm I really didn't care for this movie. It's just romeo and juliet (which I've always felt was overrated) with gangs. The music is good though, so maybe just get the soundtrack 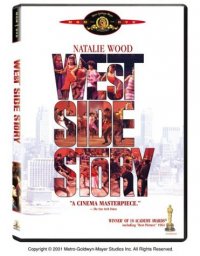