Based on a story by Daphne Du Maurier.
A videodisc release of the 1973 motion picture.
Includes the original theatrical trailer.
Julie Christie, Donald Sutherland.
Psychic terror in a Gothic setting provides the chilling backdrop in this tale of a couple's search for the ghost of their dead daughter.
DVD; widescreen.
Contents: Don't look now.

Venetian Thriller with British Grief submitted by andrewjmac on June 24, 2017, 9:58am Honestly, I picked this one up because of the great artwork Criterion has created for their restoration, and, man, am I glad they make such nice covers. Tense and sad at the same time, the film is more than the thriller it advertises itself as, dealing with the effect the loss of a child has on a family. Donald Sutherland and Julie Christie both turn in masterful performances that are worth seeing and the ending does not disappoint. 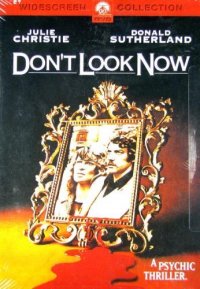 LANGUAGE OPTIONS
In the original English or dubbed in French; optional English subtitles.