DVD - 2001 DVD Fantasy Princess, Youth-DVD Movies Princess 5 On Shelf No requests on this item Community Rating: 4.7 out of 5 Based on the novel by William Goldman.
Originally produced as a motion picture in 1987; released as videodisc on Sept. 4, 2001.
Special features: "As you wish" documentary featuring new interviews with Cary Elwes, Robin Wright Penn, Billy Crystal, Mandy Patinkin and more; new audio commentary by director Rob Reiner; new audio commentary by author William Goldman; footage shot by Cary Elwes during the making of the movie; 2 original featurettes.
Cast: Cary Elwes, Mandy Patinkin, Chris Sarandon, Christopher Guest, Wallace Shawn, André the Giant, Fred Savage, Robin Wright, Peter Falk, Carol Kane, Billy Crystal.
A kindly grandfather sits down with his grandson and reads him a bedtime story. As the grandfather reads the story, the action comes alive in a classic tale of love and adventure. The beautiful Buttercup is kidnapped and held against her will in order to marry the nasty Prince Humperdinck, while Westley (her childhood beau, now returned as the Dread Pirate Roberts) attempts to save her. Along the way he meets an accomplished swordsman and a giant, both of whom become his companions in his quest.
DVD; Dolby digital 5.1 and mono; widescreen version with aspect ratio of 1.85:1, enhanced for 16x9 TVs.

An entertaining classic! submitted by Daniel Saltzman on January 21, 2010, 3:40pm The Princess Bride is just one of those must-see American movies, chock-full of puns and jokes which have soaked into modern culture. The movie varies from the book, but certainly not in a bad way. Funny, original, and very memorable, the Princess Bride is great for the whole PG-13 family.

Hilariously awesome submitted by Sonia on July 9, 2011, 6:53pm Mawwiage is what bwings us together todayyy-best line everrrr
this movie is just too awesome for words a must see for the whole family!!

Best movie ever! If you watch it (and you totally should) you'll know what I'm talking about! ;)


hilarious! submitted by fairytale on July 9, 2013, 7:10pm This movie is absolutely hilarious!! Check it out today!

A great family movie! submitted by ChallngOfTheStrs on June 13, 2014, 3:33pm This has always been a classic movie for everyone in my family -- no negative reviews here!

the princess bride submitted by a2sue on July 17, 2014, 2:47am the princess bride film is so much better than the novel, and i rarely, if ever, say that about a film. it's a classic from my teen years and it brings back fond memories. i just love it!

Inigo Montoya submitted by willow on August 31, 2015, 8:48am Everyone loves Inigo Montoya! The Spanish swordfighter seeking revenge for his father's death.

He was played by Mandy Patinkin, an American actor whose family comes from Russia and Poland.


Timeless Classic Must See submitted by nancyfpflores on August 15, 2016, 8:51am Perfect for parents seeking a fun movie to watch with their kids; kids of any age but with middle schooler/high school-age kids it makes for a fun time.

fairytale submitted by carolinepbg on August 15, 2016, 3:55pm A fairytale spin with a funny plot

Wonderful submitted by SolaireFQ on August 27, 2016, 11:31am This is a great movie that can be enjoyed at all ages.

funny submitted by rjsjwilliams on August 28, 2016, 2:27pm a must see movie and a must read book. Jokes and puns - (Billy Crystal and Carol Kane), with several sub-plots -- Montoya searching for his father's killer, the marriage of Buttercup with the line: "Mawwwiage is what bwwings us togethhhher todayyyyy, finding Buttercup finally, Andre the Giant. Kids of any age will love this and will get more from it every year as they get older.

Best submitted by kathscot on August 29, 2016, 8:59pm One of the best movies you will ever watch. Really funny and also very heartwarming. And one of the few films I prefer to the book.

All Time Great submitted by Meginator on August 7, 2017, 3:57pm The Princess Bride is one of the best films of its genre and one of the funniest films ever made. The humor is pitch perfect and, somehow, this parody of fantastic adventure stories becomes, itself, one of the most effective and engaging fantastic adventure stories out there. The film ages perfectly and is good at all ages, but never condescends to its audience; the jokes are sharp and the whole production has a certain timeless quality about it, dated only (and forgivably) by the present-day framing narrative. If you haven't seen it and know it only by its reputation, know that it's just as good as you've heard, if not better.

A timeless classic submitted by CAtoMI on August 23, 2017, 7:27pm Who doesn't love this movie? Entertaining, darling, and quotable.

Classic, Classic, Classic submitted by gem on July 11, 2018, 1:44pm As you wish...
Can't tell you how many times I have used that line and its because of this movie. Hilarious movie! There are villains, a fair maiden (Buttercup), a poor guy in love with the unattainable girl, and various incredibly memorable characters woven throughout the movie. Just when you thought everything was lost--Bam! Something changes and the movie goes in a different direction. However, it turned out that all directions really lead to the perfect end.
Oh, and be careful what you wish for. Maybe you should consider twice what you have easily overlooked. It might be better than you ever imagined.


The BEST submitted by Team_ROX on July 21, 2018, 10:40am I will judge you on whether you like this movie or not. If you don’t like The Princess Bride, then we can’t be friends.
Memorable characters, quotable lines now very mainstream, engaging story with love, humor and action. A must see for all!

Perfect submitted by zmclaugh on July 27, 2018, 7:45pm This is possible the best movie ever. Quotable and fun for everyone!

all time favorite movie submitted by rebecca.perreault on August 8, 2018, 4:57pm For an unfortunate movie title, this is a fantastic movie. Great characters, memorable lines, action, drama, and comedy. This will always remain high on my list of favorite movies.

The Princess Bride submitted by SBNB on August 17, 2018, 12:23pm It's good but not amazing-oh-my-goodness-you-have-to-watch-this-movie good.

Romance! Adventure! submitted by majean on August 17, 2018, 8:07pm This movie is so quotable. A lifetime favorite.

Very Good submitted by anacoluthon on August 18, 2018, 4:48pm A story within a story! A classic film with plenty of comedy, daring, and romance!

classic! submitted by halliejewell on August 21, 2018, 1:57pm such a great classic! reminds me of childhood and watching this over and over and wishing i was princess buttercup! As You Wish!

Great! submitted by elizabeth mayhew on August 23, 2018, 1:49am The Princess Bride is a good time for everyone, and is worth rewatching!

Classic submitted by lstorc on August 27, 2018, 3:26pm This film never gets old. It is fantastic for the whole family! Is also still very quotable!

Blame it all on Meathead; Rob Reiner directed this bunch of loonies submitted by ccrose on August 29, 2019, 11:34am My favorite supporting actor, Wallace Shawn, is in here, popping up at every pushback, dazed by the persistence of the good guys, his recurring line is now incorporated into urban language: “Inconceivable!” Don’t forget the lisp.

This submitted by Whitetnchina on July 21, 2020, 3:09pm Movie solves everything

The Princess Bride submitted by jhaberich on June 21, 2021, 7:35am This is one of my favorite movies, like it could be my favorite ever. It is full of suspense and action, but has just a bit of romance thrown in there. I love this movie and rated it 5 stars. It's totally worth watching!

Recommended submitted by mutley on June 13, 2022, 4:12pm Cute film! A young woman is torn between marrying a king and her true love. Set in fairytale setting with a host of hilarious characters. 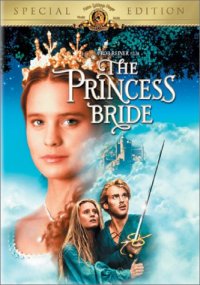