DVD - 2016 DVD Film-Noir Asphalt 1 On Shelf No requests on this item Community Rating: 4 out of 5 Title from sell sheet.
Originally produced as a motion picture in 1950.
Wide screen (1.37:1).
Special features: audio commentary from 2004 by film historian Drew Casper, featuring recordings of actor James Whitmore; new interviews with film noir historian Eddie Muller and cinematographer John Bailey; archival footage of writer-director John Huston discussing the film; Pharos of chaos a 1983 docuemtnary about actor Sterlin Haydon; episode of the television program City lights from 1979 featuring John Huston; audio excerpts of archival interviews with Huston; excerpts from footage of the 1983 AFI lifetime achievement award ceremony honoring Huston, featuring actor Sam Jaffe and the filmmaker; trailer; essay by critic Geoffrey O'Brien.
Sterling Hayden, Louis Calhern, Jean Hagen, Marilyn Monroe.
A heist is being set up to be pulled off by Doc, who has recruited a small gang to help him carry it out. Everything he could possibly think of was taken care of, down to the very last detail. It's the night of the heist and suddenly Doc's luck turns sour when betrayal strikes and the gangsters need to flee from the police.
DVD.

Great characters, well drawn and played, in a heck of a heist plot. submitted by lisa on July 30, 2019, 11:00am I would never have predicted as a child that I'd come to be so fond of Sterling Hayden.

Anyway, check out this gang and its dysfunctions. 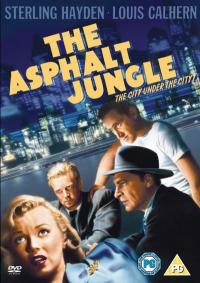