Guardians of the Galaxy

Blu-Ray - 2014 Blu-ray Science-Fiction Guardians 4 On Shelf No requests on this item Community Rating: 4.5 out of 5 Special features: Guide to the Galaxy with James Gunn; The intergalactic visual effects for Guardians of the Galaxy; Exclusive look at Marvel's advengers; Gag reel; Deleted scenes with commentary by James Gunn; Audio commentary with James Gunn.
Chris Pratt, Zoe Saldana, Dave Bautista, Vin Diesel, Bradley Cooper, Lee Pace, Michael Rooker, Karen Gillan, Djimon Hounsou, John C. Reilly, Glenn Close, Benicio Del Toro.
Brash adventurer Peter Quill finds himself the object of an unrelenting bounty hunt after stealing a mysterious orb coveted by Ronan, a powerful villain with ambitions that threaten the entire universe. To evade Ronan, Quill is forced into an uneasy truce with a quartet of disparate misfits. But when Quill discovers the true power of the orb and the menace it poses to the cosmos, he must do his best to rally his ragtag rivals for a last, desperate stand-with the galaxy's fate in the balance.
Blu-ray; region A; anamorphic widescreen (2.40:1) presentation; 1080p high definition; DTS-HD Master Audio 7.1, Dolby Digital 5.1 surround sound.

Out of this world submitted by echternk on June 16, 2015, 11:49am This movie is so much fun, you'll forget just how much of it ties into the rest of the Marvel Cinematic Universe. This movie stands very well on its own, but pay attention for the plot points!


Fun submitted by samanthar on June 17, 2015, 11:12pm It's fun and enjoyable. I personally don't consider it among the top superhero movies, but it is lighthearted and fun to watch with others.

Good submitted by AprilCDB on July 2, 2015, 2:12pm Previews didn't do much for me, but it was better than I expected. It was a decent movie to watch.

A pretty Hysterical movie submitted by Kikumatsu97 on July 6, 2015, 1:24pm I love this cast! ! Already can't wait for two!one of the best things about this movie is the soundtrack! ! Had a bunch of oldies but goodies, the makeup and effects are awesome in this movie!

One of the best movies in the MCU submitted by asopijw65 on July 15, 2015, 12:58pm I think this is one of the best movies in the Marvel Cinematic Universe! I think the only one better is Captain America Winter Soldier. The two movies have very different feels. Guardians of the Galaxy is a nice addition to the MCU as it is more funny than the other movies and does not take itself too seriously.

Entertaining submitted by wendylv on July 20, 2015, 8:17pm This was a fun movie but probably more enjoyable if you are already familiar with the characters and backstory. Read your comic books, kids!

Just Plain Fun! submitted by pamhockey25 on July 22, 2015, 10:36am I am not someone who is familiar at all with this series, and even with no background, this movie is fun and entertaining. I definitely will watch more of the series.

Fun submitted by dahyatt on August 7, 2016, 10:12pm This was a fun movie to watch. A nice change of pace from the seriousness of most super hero movies.

Great movie submitted by cathydobbins on June 18, 2017, 1:34pm My whole family loves it

Fun submitted by hmarchan on July 6, 2017, 7:27pm Guardians of the galaxy is a very fun movie. Something my entire family watched with no problem.

Top 5 marvel movies submitted by tcrbondy on June 16, 2018, 7:17pm Guardians is both hilarious and full of heart. Laughable and loveable characters that will make you cry laughing as well as cause you to tear up at powerful moments, all set against a beautiful space aesthetic

Incredibly Well Done submitted by JarrettB005 on June 18, 2018, 2:15pm I watched this with my family and it was very funny and a great addition to the Marvel canon! Second was great too.

Guardians Of The Galaxy submitted by lstorc on August 6, 2018, 3:03am Fantastic character developments

Guardians of the Galaxy submitted by SBNB on August 16, 2018, 9:47pm This was a good movie, better than I expected. Very sci-fi, but good.

Good submitted by anacoluthon on August 21, 2018, 7:25pm This movie has an amazing 80s soundtrack, and is much goofier than a lot of superhero films.

Excellent film with a great soundtrack submitted by Nehemiah9 on August 3, 2019, 8:34pm Both this and it's sequel have the most heart of all of the Marvel films. I love how light hearted they are while at the same time how real and raw the themes that they tackle are. I'm disappointed to find out that the third film won't be out until after 2023 during Phase 5 but I'm hoping they'll at least have a cameo in Thor 4. 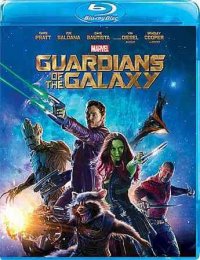 LANGUAGE OPTIONS
English, French or Spanish dialogue; Spanish or French subtitles; English subtitled for the deaf and hard of hearing.