Indiana Jones and the Raiders of the Lost ark Originally released as the motion picture Raiders of the lost ark in 1981.
Harrison Ford, Karen Allen, Paul Freeman, Ronald Lacey, John Rhys-Davies, Alfred Molina, Wolf Kahler, Anthony Higgins, Denholm Elliott.
Indiana Jones, an archeologist, embarks on a thrilling quest to locate the mystical Ark of the Covenant. Accompanied by his fiesty ex-flame Marion Ravenwood, Indy must discover the Ark before the Nazis do, and he has to survive poison, traps, snakes and treachery to do so.
DVD, widescreen.

Classic submitted by crazypockets on July 12, 2013, 4:54pm ...but not my favorite of the franchise. I think as kids my friends and I thought this was the most boring one. I think it really is more for adults (plus the whole melting Nazi thing is really kind of terrifying...) than the other ones, but it's still good and a classic.

Classic submitted by rlmorgan on July 19, 2013, 8:56pm A good, classic, adventure film. One of the most grown up of the Indiana Jones movies.

Great! submitted by Lucy S on August 2, 2014, 5:02am an entertaining and classic adventure.

omg submitted by kelleyc on August 12, 2016, 5:11pm Indiana Jones will never NOT be the best thing ever.

Great movie! submitted by vulke99 on August 19, 2017, 1:50pm I really enjoyed this movie multiple times. Can never get enough of Indiana Jones and his adventures.

Raiders of the Lost Ark submitted by SBNB on August 7, 2018, 8:53pm It's a classic, but I thought it was rather boring. Not as boring as the second one though.

Great Movie submitted by alexmichaelp on June 25, 2019, 2:40pm Must see this epic adventure unfold in front of your eyes!

A fun movie submitted by yufamily on August 25, 2019, 7:37pm Harrison Ford is great as Indiana Jones!

Action Classic submitted by Meginator on August 20, 2020, 12:48am Content Warning: The climactic scene includes some gore and an animal is killed (offscreen, in a nonviolent manner).

This film is a genre classic for a reason, with well-realized characters and a series of iconic action sequences that have had a lasting influence on filmmaking. Harrison Ford plays Jones to droll perfection and Karen Allen portrays a (relatively) progressive female character, Marion Ravenwood, who is more than just his romantic foil. The film incorporates a nice variety of action scenes, including fights, chases, explosions, and all manner of dramatic escapes, and they make sense within the shape of the plot; though some are now cinematic clichés, they work so well in context that it hardly matters. From a strong script to solid acting and dramatic stunts, this is an action classic that consistently fires on all cylinders from beginning to end. Few films have ever found a balance as well as this one does. 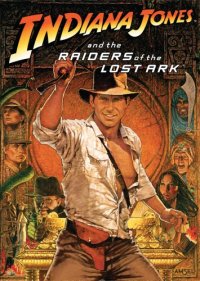