Battle for the Planet of the Apes

DVD - 2000 DVD Science-Fiction Battle 1 On Shelf No requests on this item Community Rating: 4 out of 5 Fun submitted by Chris82 on July 31, 2011, 4:12pm Easily the worst of the Planet of the Apes series. Its still worth watching because of its unintentional humor and campiness. 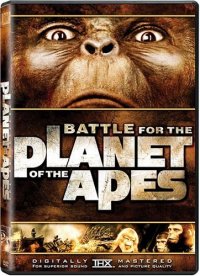