Tangled Before Ever After Fun Follow-Up submitted by Meginator on June 19, 2017, 9:44pm This 2D animated movie is both a follow-up to the animated movie and a lead-in to the (as of this writing, new) television series. If you haven't seen the original feature film, do! It's fantastic!

This movie has a lot to live up to and does so admirably, not least by keeping the original cast intact. The switch in animation styles isn't too jarring and the characters all seem like themselves. The animation itself is smooth and pleasant and worthy of a growing Disney franchise. My only complaint is that I didn't realize this was essentially a pilot, and as such it leaves a pretty big mystery unsolved. This is slightly annoying but I probably would have watched the series anyway so it's all good in the end.

I recommend this for fans of Tangled and for anyone interested in Disney's more recent, more modern princesses. This movie maintains the tone and humor of the original film and I enjoyed it thoroughly, even if it's not quite as good as its predecessor. 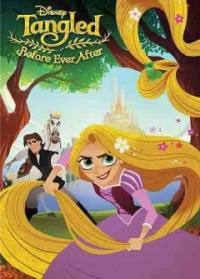