Originally broadcast as single episodes of a television program in 2016-2017.
"2-disc set includes all 10 season one episodes"--Container.
Wide screen (1.78:1).
disc 1. Renoir ; Trainee ; Strays ; Easter in Bakersfield ; Uncle Dad -- disc 2. DJ twins ; Cowboys ; Sugar pie ; Picnic ; Family portrait.
Zach Galifianakis, Martha Kelly, Louie Anderson.
"Chip Baskets (Zach Galifianakis) wants to follow his dream of being a French clown. However, reality keeps interfering. Saddled with financial difficulties and facing an impenetrable language barrier, he moves back home to Bakersfield with high hopes. There, he is forced to confront his past while working as a rodeo clown--and competing with his siblings for his mother's (Louie Anderson) approval and affection"--Container.
DVD; region 1; NTSC; Dolby Digital 5.1.

So funny submitted by sumsaylor on July 30, 2018, 8:21pm Zach Galifianakis aspires to be a clown and hilarity ensues. Louie Anderson is also amazing as Chip's Mom.

Really so funny! submitted by MH17 on August 6, 2018, 9:11pm I agree with sumsaylor, who nails it when she says Louie Anderson is amazing as Chip's mom. Anderson plays the mother with equal parts humor and pathos and an unusual brand of maternal love, especially given that, you know, Anderson is a man. At times it seems Galifinakis and Anderson are both improving during scenes, which usually adds something to the humor but occasionally doesn't land. Really, though, the first episode is worth the rental--comedy gold. 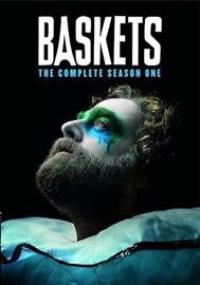