Contains both the Unrated and rated versions of the motion picture.
Special features: Audio commentary with director Karyn Kusama and writer Diablo Cody (Theatrical version only); audio commentary with director Karyn Kusama (extended version only); trailers. (Features are not rated or closed-captioned.)
Unrated version -- Theatrical version.
Megan Fox, Amanda Seyfried, Johnny Simmons, J.K. Simmons, Amy Sedaris, Adam Brody.
Needy is a reserved bookworm. Her best friend is Jennifer, a conceited cheerleader. The two share little in common. They share even less in common when Jennifer mysteriously gains an appetite for human blood after a disastrous fire at a local bar. Soon, Needy's male classmates are steadily killed off in gruesome attacks and she must uncover the truth behind her friend's transformation and find a way to stop the bloodthirsty rampage before it reaches her own boyfriend.
DVD, region 1, widescreen (1.85:1) presentation; Dolby Digital 5.1 surround, Dolby Digital surround, dual-layer, NTSC.

The Diablo's Body of good work expands submitted by CasualTim on April 10, 2010, 12:11pm I'm going to start this one with the most surprising bit of praise I've offered up in a very, very long time.

Megan Fox gives a very good performance in "Jennifer's Body." Yes, it may have something to do with the fact that the character she plays is a mean girl in high school defined almost entirely (at first) by her looks, but listen: Megan Fox, acting well. (Seyfried does a good job, too, by the way. Simmons was a bit clunky, and has clearly not made the leap from his "Hotel for Dogs" maturity level, but some of his robotics can be chalked up to his being another 'innocent bystander.')

Okay. Feel free to let that soak in for awhile before you continue. It's true. It's impressive. It's shocking. Megan Fox, good job.

This is a good, entertaining movie. As a sophomore piece of writing for Diablo Cody, it shows promise of continued entertainment. The premise is simple and close to home in terms of what we sometimes imagine might be true. Cody's version of 'horror' includes some terrific inclinations - physical humor with good timing and sounds (kudos to director Kusama); the liberal use of stereotypes, twisted just enough to keep us entertained; a good balance between the seen and unseen creepies; and especially stretching out the tense moments well beyond what is reasonable (in a good way).

However, a warning: if you were unable to excuse all the rad, hip slang in "Juno" as unbelievable, if your first and continuing thought was "kids don't talk like that," and if that shaped your opinion of that movie, see "Jennifer's Body" with caution. The first two thirds of this movie has more and thrice-as-annoying CodySpeak than was in all of "Juno." But in "Jennifer's Body," it's not as excusable, both because it's no longer original and because the individual inventions are just so much more twee and smug. It also does not fit into the world we're seeing: Juno lived in a slightly skewed world. Jennifer - besides all the gore and stuff - is meant to live in a stereotypically-high school reality. It really, really bumped me, and it did so often.

But there is a shining light (of primordial black vomit) at the end of the movie: CodySpeak mysteriously vanishes for the last third of the film. This is when we get to see this work really shine. It's clear that this is not a movie with an ultrabudget. It's clear that this movie is better off because of it. Unlike "The Hurt Locker," which I recently reviewed in a mostly negative manner due to its complete and utter failure during the last six seconds, it's clear that Kusama took her time with the end of this one. It's a delightful wrapping up of the story that had me laughing and cheering.

cool submitted by buttercupsmiley on August 7, 2011, 4:40pm amanda kills her so called friend

Alright submitted by Stinglikeawalrus on July 1, 2021, 12:53am It's weird, let's start with that. But I did really enjoy it. It isn't a cinematic masterpiece but it's a fun movie with a ton of blood that will keep you engaged. Also Amanda Seyfried is great. 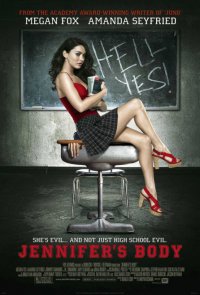